Pop quiz, Don Quixote: You’ve got a 2 year old bottle of small batch imperial stout from the Netherlands… what do you do? WHAT DO YOU DO?

Shoot the hostage, of course! Or you know, drink it. Yes, it’s time to tilt at windmills again and take on another big stout from Brouwerij De Molen (a brewery that resides in a historic windmill, hence the references), so sharpen your jousting lances, we’re going in for some Hel & Verdoemenis (Translation: Hell & Damnation): 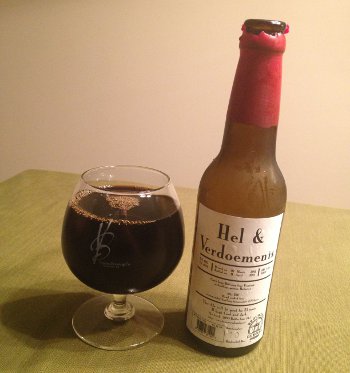 De Molen Hel & Verdoemenis – Pours a pitch black color with an almost nonexistent head, just some brown bubbles. Smells of rich malts, caramel, vanilla, just a hint of roast. My kinda nose. Taste has lots of that rich malt and caramel, hints of roast – just what the nose promised. It’s not bitter, but it clearly has enough hops to balance out all those malts. Mouthfeel is rich, thick, syrupy, and full bodied. Almost no carbonation at all – not quite still, but pretty close and the one big flaw that drags the beer down (for me, at least). Overall, it’s really good and I did manage to enjoy it. Again, I wish there was more carbonation, but perhaps fresher bottles would be better. Still worth a look. B+

I would say that maybe this is my fault for hanging on to the bottle for a while before opening it (in fairness I did purchase it about 6 months ago, so it’s not like I’ve been holding on to it for the full 2 years), but on the other hand, the label sez “This Ale will be good for 25 years if kept cool and dark”, so I was lowballing it. De Molen seems like a quality little Dutch brewery though, and if my wallet can handle the strain (and this is expensive beer), I’d like to try some more of their stuff.