This is a Scottish ale (like, for reals, a beer brewed in Scotland, not just a beer in that style) aged in whisky casks. RateBeer sez they were Dalmore barrels, but the bottle label sez they’re “hogsheads used to mature fine Orkney Single Malt Whisky.” Well, Dalmore isn’t on any of the Orkney islands, so perhaps that was an old batch. If they’re really using Orkney casks, they’re using either Highland Park or Scapa barrels. I’ve always found the overpowering peat smoke of Islay Scotch to be a problem for barrel aged beers, but neither of these distilleries put out anything that aggressive. This doesn’t mean they’re bad or anything, and I know Highland Park casks can be used to great effect in aging beer. Scapa seems to have less of a reputation for complexity, but I’m sure it would work fine.

So does this marketing fluff and high price tag translate into amazing beer? Well, it’s fine, but not really: 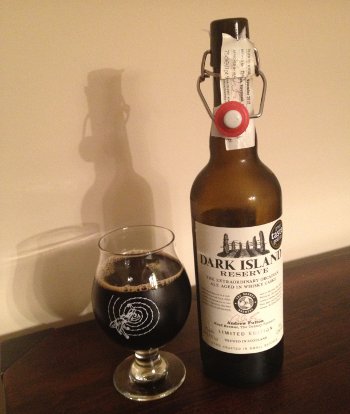 Orkney Dark Island Reserve – Firstly, yes, it is a gorgeous bottle and overall package. Certainly ticks those Pavlovian checkboxes for us beer nerds. But, you know, you can’t drink the packaging. Pours a deep, dark, clear brown color with half a finger of quickly disappearing light brown head. Smells of booze, bready malt, toast, maybe a hint of peat smoke and Scotch (which yields complexity, not overpowering Islay smoke). Taste has that bready toast base, with some caramelized sugars or molasses peeking through, and just a bit of boozy Scotch. As it warms up, the Scotch comes out a little more. Mouthfeel is full bodied, smooth, a bit of richness, but not as much as I’d like from a whisky barrel aged beer. Overall, it’s good. Even very good… but not really worth the price tag. I’m feeling generous, so give it a B+, but unless you see it for cheaper than $20, I’d give it a pass (and given that it usually goes for double that, you’ll probably never see it that low.)

Well, I guess you can’t win them all. I suppose a B+ isn’t a “loss”, but maybe I’m being too generous. In any scenario, I don’t think it’s worth the price. Onwards and upwards.