In 2004, head Cantillon brewer Jean Van Roy was supes excited that his hometown football (that’s soccer to us Yanks) team won a championship, so he cracked some barrels of 2 year old lambic, dry hopped it for good measure, then bottled his Cuvée des Champions! Sadly, it seems that Brussels’ soccer club Union St. Gilles has since fallen on hard times, to the point where a disgusted1 Jean Van Roy decided that “he could not in good conscience dedicate the beer to ‘Champions.'” As such, the beer is now named a less celebratory Cuvée St-Gilloise2.

It’s labeled a Gueuze, but it’s not really a blend of younger and older beers, just that swanky 2 year old stuff. This makes me wonder why the “Cuvée” moniker, though I suppose there’s still blending of different barrels going on here. As for the dry-hopping, RateBeer sez they used Styrian Goldings, but this guy sez they changed to Hallertau. It’s an interesting and uncommon tweak for lambics, but I don’t think either hop variety would tweak American hopheads all that much and this bottle is pretty old, so I’m sure the aroma has faded considerably. Not that I’m complaining, as this was still rather awesome. 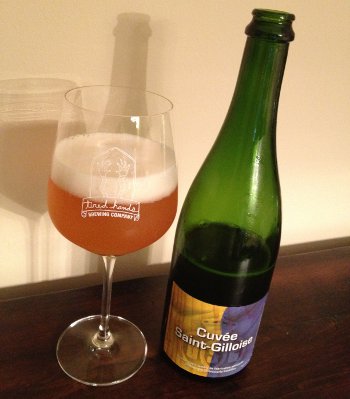 Cantillon Cuvée St-Gilloise (AKA Cuvée Des Champions) – Pours a bright golden yellow color with a couple fingers of bubbly white head. Smells of funky, lightly earthy Brett, with lots of fruity notes, lemony, almost more like a funky saison than guezue. Taste is bright and fruity, lemony, nice subtle oak character (which opens up a little more as it warms), with a well matched sourness emerging quickly, bringing that guezue character big time. Mouthfeel is light, crisp, and refreshing, a little thinner than some other gueuzes, but not in a bad way, and it’s highly drinkable too. Overall, this is great, why do I need to rate these? They’re all so damn good. A-

Danger: lambic reserves have reached critical levels. Only one or two left. Fortunately, I’ve got a line on some (probably not Cantillon though) that I might be able to grab next week. Fingers crossed. Also worth noting that I’ve saved the supposed best for last, but you’ll just have to wait a couple weeks to read about that sucker.

1 – As a Philadelphia sports fan, my notions of sport fandom are probably much different than Jean Van Roy’s, to the point where he would probably describe “disgusted” as an exaggeration. In Philly, such a description would be much more vivid and colorful, involving expletives and threats of violence, so I find “disgusted” to be a decent compromise.

2 – But on the other hand, he’s still dedicating a beer to his hometown team – so he’s no bandwagon fan either.