Not content with serving the underappreciated market for lagers, Jack’s Abby also apparently likes them some smoked beers… another underappreciated style. This time they teamed up with the almost homebrew-sized Vermont operation Lawson’s Finest Liquids, who are also fans of smoked malt. I’ve heard great things about Lawson’s, and one of these days I’ll plan out a trek to Vermont to hit them up, along with the other usual suspects (Hill Farmstead, Alchemist).

I’m not a huge lager person, and while I can appreciate a nice smoked beer from time to time, I do sometimes find myself wondering who put their cigar out in my beer… That being said, this sucker also has a helping of maple syrup, which I am quite a big fan of, so let’s see how this one works: 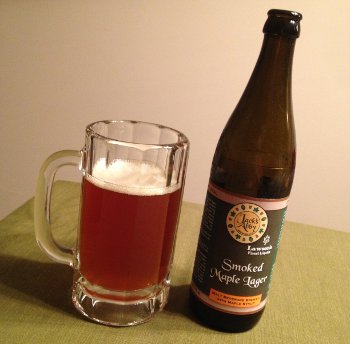 Jack’s Abby & Lawson’s Finest Liquids Smoked Maple Lager – Pours a deep, dark chestnut color with a couple fingers of bubbly white head. Smells lightly of campfire, definite smoked malts here but not overpowering, and a sweetness in the nose as well. Taste is very sweet, creamy malt character, with that smoked malt playing nicely with the rest of the flavors, none of which is particularly pronounced. Mouthfeel is velvety smooth, creamy, almost like a milk stout (sans roasted malt), medium bodied and very easy going (update: apparently this was made with lactose, which explains that character). Overall, a solid smoked beer. It doesn’t have that “Who put their cigar out in my beer” character, and it is complex and balanced. B+

Another solid brew from Jack’s Abby. Nothing that’s blown me away, but really good stuff. I got a couple others to get through, and will certainly keep an eye out for more of their stuff if I ever find myself up that way…