So far, Tired Hands has made quite a few barrel-aged beers, but as far as I know, they’ve all been sours. Excellent sours! And while I’ve certainly caught that sour bug over the past year or so, I have to admit that I still have an inordinate fondness for straight up whiskey barrel aged stouts. So it was with great anticipation that I chiseled my way through the waxed cap of Tired Hands imperial stout, Only Void, aged in local Dad’s Hat Rye Whiskey barrels.

I had the “regular” stainless steel aged Only Void at the Anniversary Party, and I had the Red Wine barrel aged variant on Only Void day. Both were excellent, so I was really looking forward to this bottle – one of only 144 available at the release (adding in Believer’s Club members puts the full allocation at somewhere around 220 or so – mental note: find out how to get in on that). So enough blabbing, let’s drink this sucker. Oh and check out this fancy glassware too: 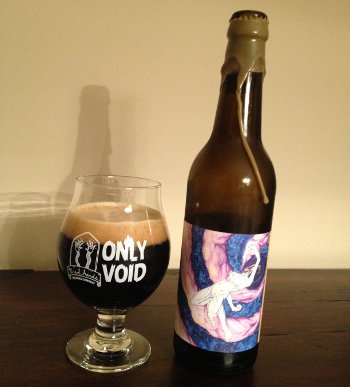 Tired Hands Rye Barrel Only Void – Pours a deep dark, almost black color with a couple of fingers of tan, khaki head. Fantastic retention, the head never really goes away. Smells of chalky roasted malts, some caramel, maybe a hint of whiskey (but it’s not very pronounced in the nose). Taste is sweet, full of rich caramel, very little whiskey and oak, but lots of vanilla. Chocolate flavors also present, and it evolves as it warms up too. Minuscule roasted malt character. Mouthfeel is super smooth, rich, creamy, full bodied, but surprisingly drinkable. Well carbonated, and no evidence of the booze whatsoever – impressive for a 12% beer. Overall, this is great, delicious stuff. Not quite best in class and no where near as whiskey forward as I’d expect, but right up there with the cool kids and face melters anyway. A-

Another winner from Tired Hands, well worth waiting in line for. These guys are absolutely killing it right now. And of course ther’ll be more jealousy inducing posts about Tired Hands going forward!