Beer dorks don’t seem to get very worked up by lagers, but then Jack’s Abby shows up in Framingham, Massachusetts, and everyone starts losing their minds. It shouldn’t be a surprise, because there’s lots of flavorful lagers out there, but perhaps neophytes still associate lagers with the Macro crowd. Or maybe they’re just so overawed by massive facemelting ales that the more subtle, cleaner lagers get lost in the shuffle. Whatever the case, there’s a lot of room in the market for breweries that take the road less traveled. From what I can see, Jack’s Abby is doing very well for themselves. They’re a small operation and only distribute in MA, but a very generous friend kindly picked up a few of their beers during a trip up there last week (Thanks Danur!). I was most excited to get my grubby hands on these suckers, and immediately made preparations to drink this one first: 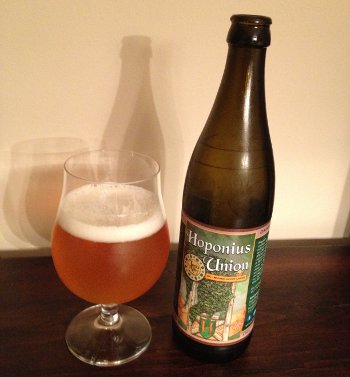 Jack’s Abby Hoponius Union – Pours a slightly hazy yellow golden color with a finge ror two of dense white head. Smell is full of hugely floral hops, some grapefruit, and maybe a subtle bubblegum yeast character too. Taste is full of those floral hops, herbal even, a bit spicy, some grapefruit, with a well matched bitterness towards the finish. Not as much citrus as I’d expect from something made with Citra and Amarillo (Centennial, on the other hand, seems to be dominant here), but that’s not a bad thing at all. Mouthfeel is medium bodied, clean, crisp, and easy going. Overall, this is really good, easy drinking stuff. Not quite exactly what I was expecting, but damn good nonetheless. B+

A promising start, and I’ve got three more lined up. You will no doubt be seeing them over the next couple weeks.