I’ll be the first to admit that my palate isn’t the most refined of them all, but one of the things I appear to have absolutely no tolerance for is Diacetyl. It’s a byproduct of fermentation that can yield powerful flavors of butter or butterscotch to a finished beer. I know what you’re thinking: Butter and Butterscotch are awesome! And yes, it is, but you wouldn’t put a pat of butter in your beer, would you? That’s kinda gross, is it not? Well, to me it is, but to some, low levels of diacetyl are actually desirable (high levels, not so much). Notably, a lot of English pale ales tend to lean in that direction. Not all of them are like that, of course, but that just makes sampling British beers a bit of a crapshoot for me. In this case, an expensive crapshoot, as I (wrongly) assumed that a port cask aged barleywine would have minimal diacetyl. 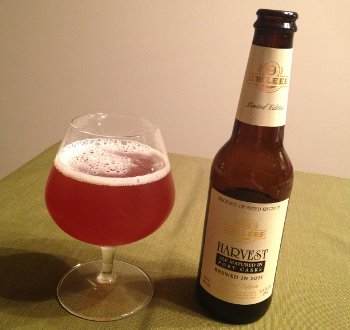 J.W. Lees Port Cask Harvest Ale – Pours a cloudy orange brown color with half a finger of off white head. Smells of toffee and some fruitiness, presumably from that port cask. The toffee has that buttery diacetyl note that I generally hate in British beers. And yep it’s prominent in the taste too. I’ve had worse examples of this, but I just can’t get on board with that particular character. Otherwise, it’s got some nice port notes, and some caramel and toffee that are nice. Mouthfeel is rich and smooth, full bodied. Overall, it’s clearly well made, I just can’t get past that diacetyl. C+

A pity, as I like a good Porto every now and again and you rarely see US beers aged in Port barrels. Yeah, so anyway, I’m probably not going to check out the various other barrel aged treatments of this stuff, especially given the expense (for a tiny bottle, no less). Fortunately, I had some other great beer this weekend that would make up for this one, so stay tuned.