Made in pretty much the same fashion as the Kriek, but with raspberries instead of cherries. Named Rosé because of the color, but dedicated to Gambrinus instead of Bacchus. Gambrinus is a legendary king of Flanders, and an unofficial patron saint of brewing (the official honor belongs to Saint Arnold). He’s also apparently getting a lapdance on the label of this beer. Good for him. 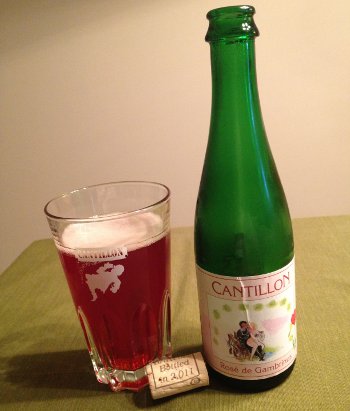 Cantillon Rosé De Gambrinus – Pours a clear, bright red/amber color, so many robey tones, with a finger of fizzy pink head. Smells of raspberries and oak, with that lactic twang tweaking my nose for good measure. Taste hits with oak and sweet raspberries, with a fruity, tartness hitting in the middle and intensifying into a puckering, sour finish. The oak character is really well developed here, almost as prominent as the raspberries. Mouthfeel is well carbonated, crisp, medium bodied with a richness I associate with the oak, and pretty darn refreshing. Overall, another winner from Cantillon. I still might prefer the Kriek, but I think that’s just because I like cherries better than raspberries! A-

And the hits from Cantillon just keep coming. A couple more in the pipeline, too. Very exciting.