Arcadia Brewing Company is located in Battle Creek, Michigan, also home to Dr. John Harvey Kellogg… Yes, the guy who invented breakfast cereal. Battle Creek has thus become known by the name Cereal City, USA, complete with a massive “breakfast food funhouse” (whatever that means). Arcadia either hates the moniker, or they just really love puns and couldn’t resist naming their English Barleywine “Cereal Killer”. There’s a lot of text on the label, so I guess you wouldn’t call it minimalist, but I really like the one tiny graphical element they have: a hand gripping a spoon like it’s the psycho knife (and for added verisimilitude, they’ve included some dripping milk which… also calls to mind Psycho.)

This particular bottle was aged in Bourbon Barrels (part of the same release as that Imperial Stout I enjoyed a while back). Like the Stout, this one features the same industrial strength waxed cap and rumor has it that this was aged in those mythical Pappy Van Winkle barrels that magically transform mediocre beers into spectacular face melters. Not having ever had the regular Cereal Killer, I can’t really say, but I did find that this treatment worked better for the barleywine than it did for the stout. This is some pretty fantastic stuff. 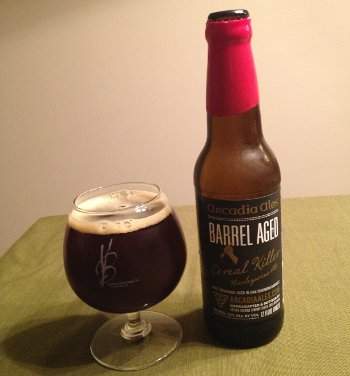 Arcadia Bourbon Barrel Aged Cereal Killer Barleywine – Pours a deep, dark brown color with a cap of off white head that resolves into just a ring of head pretty quickly. Smell is pure bourbon and caramel, some toffee, oak, and vanilla playing too. Taste hits the same notes, lots of caramel and toffee mixed with that bourbon, oak and vanilla character. Mild booziness is apparent too, and that bourbon character becomes more prominent as it warms up. Textbook bourbon barrel barleywine stuff here. Wouldn’t call it balanced, but it’s unbalanced in, like, a good way! Mouthfeel is rich, full bodied, a little boozy, decent carbonation but smooth too. Overall, a really nice BA barleywine, textbook stuff… but like, a really good textbook. A-

I’ve got another one of these in the cellar, and I’m glad for that. I’m guessing that aging in barrels for 22 months is not something they’re set up to do on a rolling basis, but who knows. Maybe we’ll see some of this every year. Definitely worth seeking out.