My fourth batch, brewed almost 2 years ago to the day, was a saison that turned out fantastic when it was fresh, but degraded over time (and become super carbonated). I’ve been wanting to make another batch of saison recently, so I took the recipe for the initial batch, toned down in terms of malt, and threw in some fancy Nelson Sauvin hops for yucks.

The real adventure this time around will be splitting the batch into two after primary fermentation: half will be bottled at that point, with the other half going into a secondary fermenter and dosed with Brettanomyces. I’ve long ago established that saisons are the least coherent style in the history of beer… which is actually one of the reasons I love them so much. My initial batch (and half of this current batch) was patterned after Saison Dupont, a classic of the style. The Brett dosed half of this batch will (hopefully!) be closer to Fantôme’s saisons, which is where the name of this beer (Kaedrôme, get it?) is coming from (big thanks to Scott of Beerbecue for suggesting that perfect name).

Allllrighty then, lets get this party started: 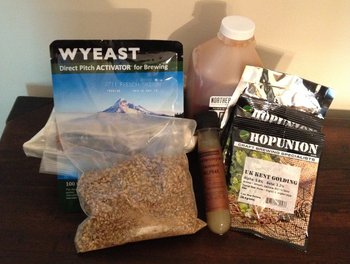 I’ll spare you the play by play, as that’s mostly the same for every batch. The only thing I’ll say about that is that my new kitchen kicks ass, and has removed 30-60 minutes from the process. It turns out that the “Power Boil” element actually lives up to its name (it still takes a little while, but much faster than my old stovetop). And the bigger, deeper sink makes cooling in an ice bath much quicker too. It only took a little less than 3 hours, including all the cleaning.

I hope the Nelson Sauvin hops work out with this one. I basically chose them on a whim, thinking they would go pretty well with the saison. I hedged a bit and used some Saaz that I had laying around too, so I hope it’s a solid combo. Hop Additions at 60, 15, and 5 minutes remaining in the boil. Irish moss at 15 minutes. Orange Peel at 5 minutes. Pitched the 3711 yeast at 70 degrees.

Now I just need to figure out the process for the Brett dosing, but I’ve got a couple weeks for that. Again, general idea is to fill up my 3 gallon secondary fermenter, pitch the Brett in there, and bottle the rest of it right away.

I know very little about the different varieties of Brettanomyces, but in looking around, this seems like the one that fits me best. For the uninitiated, Brett is a wild yeast strain. It usually contributes funky, earthy characteristics to beers. Some people use descriptors like “horse blanket”, “barnyard”, or “band-aids” (among lots of other stuff, even smoky and spicy flavors), but that… doesn’t sound good, does it? Indeed, Brett is generally viewed as a contaminant and thus something to be avoided, but if done properly, it can match really well with beer, especially sour beers. This saison isn’t meant to be sour, though apparently the Claussenii strain that I’m using is more subtle than some of the others and contributes a “fruity, pineapple like aroma”. I’m going for something along the lines of older Fantômes (which tended towards sour) or Logsdon Seizoen Bretta, but everything I read about Brett is that it’s a little on the unpredictable side. So fingers are going to be crossed.

Since the primary fermentation yeast is going to yield a pretty dry beer to start with, I’m guessing that the Brett won’t be a massive contribution, but that sounds good for my first attempt at this sort of thing. Unlike regular brewer’s yeast, Brett will eat up pretty much any sugars left in the beer, so I need to give it a lengthy period to do its thing, at least a couple months. Luckily, it’s a hardy organism and thrives in warmer temperatures (so summer was a good time to experiment with this sucker). On the other hand, my understanding is that Brett is difficult to clean, etc… and a lot of homebrewers advise keeping the equipment that touches it separate from your regular brewing materials. This should be fine, as I’ve basically been using the same stuff for two years and some of it could probably be refreshed anyway.

So this is going to be one of the more interesting batches I’ve ever made… if it goes well. Wish me luck!