I bought this bottle over a year ago and promptly cellared it, as I’d heard it wasn’t particularly special and maybe laying it down for a while would improve things. It’s been on the back burner (pun intended!) ever since, and I recently promoted it to the fridge, where I finally cracked it open. There are actually three versions of this beer, a regular one, this one, which is aged on oak somehow (I’m guessing just oak chips or cubes or somesuch), and a bourbon barrel one (which is, like, 4-5% more alcohol than this one). It’s more of an American barleywine and age has certainly mellowed it out some, though it still wound up having a potent hop character (which I suspect was different but more prominent in a fresh bottle). Nothing to sneer at, but not a real eye opener either: 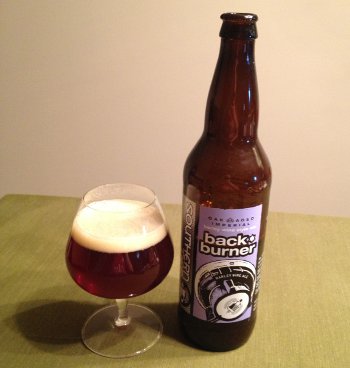 Southern Tier Oak-Aged Backburner (Imperial Barley Wine Style Ale) – Pours a clear dark amber brown color with a finger of off white head. Robey tones. Smells of sugary, fruity malts, some crystal malt caramel, some piney, resinous hops, and maybe a hint of oak. Taste is very sweet, with a helping of fading, piney, resinous hops, and some light crystal malt character. Finish has some hop bitterness to it, and a faint hint of that oak too. Mouthfeel has a medium body and medium carbonation, a pretty medium all around feel. Slightly sticky feel, but nothing excessive. Overall, this is a pretty straghtforward, but pretty solid beer. B

I don’t have any Southern Tier in the immediate pipeline, but I definitely want to try out the bourbon barrel version of this, as well as Choklat, though I’m not exactly rushing for either of those.