Logsdon absolutely blew me away with their Seizoen Bretta, a Brettanomyces doesed version of their base Seizoen (aka saison). I have perhaps drank these beers out of order, as what I drank last Friday was that base beer, a simple saison conditioned with pear juice and whatever awesome farmhouse yeast strains they’re using (which seem closer to the Dupont strain than anything funky). That being said, I’m hard pressed to think of a non-funky saison that’s this good, save for that style-defining Saison Dupont. Special thanks to Jay from Beer Samizdat for sending this one my way! 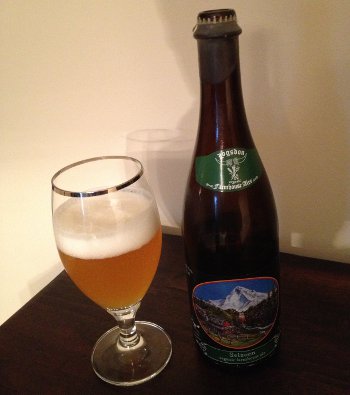 Logsdon Seizoen – Pours a very pretty, very cloudy yellow color with a couple fingers of fluffy head that has great retention and leaves plenty of lacing. Smells of classic Dupont yeast, very spicy, clove, light amount of pepper, some fruit. Taste follows the nose, huge Belgian/Dupont yeast character, sweet and spicy, perhaps more fruit character than Dupont, pears and banana. Mouthfeel is fantastic, highly carbonated and effervescent, but not overcarbonated, a little of that spiciness, and actually quite refreshing. Overall, a great example of classic saison in the Dupont style. A-

This marks the last beer of my most recent trade with Jay, so I guess I better get on the ball and find my way towards some more interesting beers. Some interesting local stuff coming up, and maybe a trade with someone from Texas, so stay tuned. And I’ll definitely be on the lookout for more Logsdon beers, in particular the Peche ‘n Brett, which just sounds spectacular.