Sierra Nevada seems to have a weird reputation. On the one hand, most of us cut our teeth on the likes of their basic Pale Ale (and I suppose freshly minted beer dorks are digging into Torpedo these days), but these are mass produced beers that don’t usually inflame beer nerd passions for very long. Don’t get me wrong, that pale ale has long been a beacon of light in otherwise inhospitable beer wastelands like sports bars or wedding receptions, but we’re creatures of novelty. Fortunately, Sierra Nevada groks that notion, and thus they manage to put out a lot of more experimental stuff alongside their standards. From what I gather, the really out-there stuff doesn’t really go far and wide, but occasionally they make an appearance all the way out here on the east coast.

Bigfoot is one of their standards that is frequently recommended to nascent beer nerds. Want to try a rock solid American Barleywine? Get yourself a Bigfoot. Want to dip your feet into the realm of cellaring beer? Buy a 4 pack of Bigfoot and drink one per year. They’ve been putting this beer out every winter since the early 80s and it’s widely available, so that’s a big part of its reputation. Heck, one my local bottle shops is selling 4 year old bottles of the stuff.

Anyways, to celebrate the 30th anniversary of Bigfoot, Sierra Nevada aged a batch of this stuff in old whiskey casks for over a year. The hops have mellowed and the oak adds that rich caramel and vanilla character, making this very different. I was surprised by how much I enjoyed this sucker, though perhaps I shouldn’t have been: 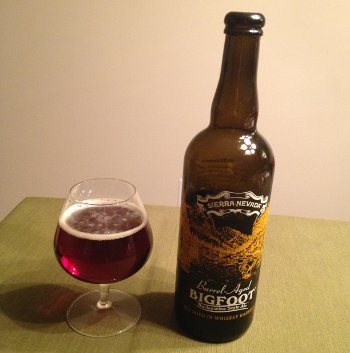 Sierra Nevada Bigfoot Barleywine Style Ale – Whiskey Barrel-Aged – Pours a very striking clear amberish copper color with a finger of off white head. Smells strongly of citrusy, piney, resinous hops, with just a bit of the whiskey barrel character and some caramel too. As it warms up, the whiskey barrel becomes more prominent. Taste is filled with a rich caramel, vanilla, and oak character, with the hops emerging in the middle and intensifying through the finish, which has a nice, balancing bitterness as well. Again, as it warms, the whiskey barrel aging components really open up and some booze makes itself know in the middle to finish as well. Mouthfeel is tightly carbonated, very smooth, with a full body and richness from the barrel aging. Overall, this is a superb BA barleywine. A-

Definitely a worthwhile beer to seek out. It’s not a Sucaba killer or anything, but it’s damn good. I didn’t have any trouble finding this on the shelf, but I gather that it went pretty quickly, so if you see one and it sounds like it might be up your alley, get it.