I thought these saucy High Water brewing fellas were trying to tell me something, but then a friend kindly informed me that the name of this beer, Old & In The Way, was probably a reference to the album. It turns out that Old And In The Way was one of them bluegrass supergroups, including the likes of Jerry Garcia and, heck, I know nothing about bluegrass, so why don’t you just go look it up on Wikipedia. I put two and two together, realized that the brewery was named High Water, and thought Like, right on, man! Ok, so I do a poor impression of a stoner. Sue me.

What we’ve got here, courtesy of Jay from Beer Samizdat (thanks again, buddy!), is a vintage, oak-aged barleywine dating back to 2011. My kinda beer: 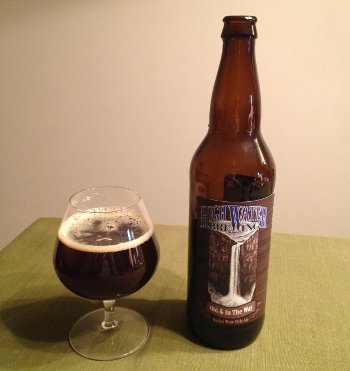 High Water Old And In The Way – Pours a murky brown color with a finger of off white head that leaves some nice lacing as I drink. Smells of rich caramel, dark fruity malt, vanilla, and oak, with some light resinous pine hop notes peeking through too. Taste follows the nose, lots of caramel and fruity malt character, with some oak and vanilla, plus just a touch of citrus and pine hops. As it warms, that caramel opens up, yielding some toffee and brown sugar which works well with the rest of the flavors and lends a welcome complexity. Mouthfeel is smooth and rich, almost creamy, carbonated, but very tight, which keeps it from being too big. It’s not dry, but there’s no real overly sticky character either, and it’s not at all cloying. More on the English Barleywine side of things than the American, though it comes down somewhere in between. Overall, a very fine, complex sipper! A-

Another mighty fine brew from a small, otherwise inaccessible, bay-area brewer… It turns out that the reason I found this to be somewhere between an English and American barleywine is that they brewed two different batches, one more English and the other more American, then blended them together. I’m a little unclear on whether bourbon was involved, but if it was, it was very subtle. I got some medium oak and vanilla character, which always goes really well with the caramel and brown sugar base this beer has, but no real bourbon… Not that it really matters, as it’s a really good beer. Perhaps it was more bourbon forward when super fresh…