Because you don’t know the power of the dark side until you try it: 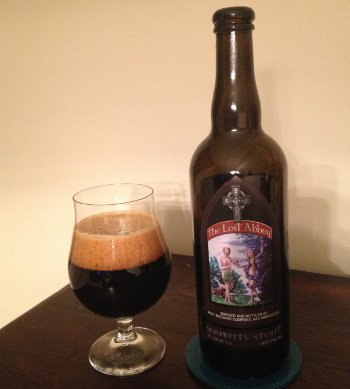 The Lost Abbey Serpent’s Stout – Pours a pitch black color (darker than a politician’s heart, you know, while we’re talking about serpents and good vs. evil and all) with a gorgeous two finger light brown head. Seriously dark head here, and it leaves tons of lacing as I drink. Smells of rich, dark malts, a nice roast, chocolate, maybe some coffee. Taste starts with those rich dark malts (a richness I usually associate with barrel aged stuff, though I don’t think this is barrel aged), then the roast hits hard, black coffee and bitter dark chocolate asserting themselves, and a well matched finish too. Not really bitter, per say, but there’s plenty here that balances out the sweetness. Mouthfeel is thick and chewy, lots of rich malts, but there’s plenty of carbonation to balance things out too, making this a pleasant sipper (impressive for such a big, heavy beer). Overall, this is a fantastic imperial stout, near top tier (and certainly one of the best that’s readily available in the area). A-

Every time I have a Lost Abbey beer, I’m tempted to take out a second mortgage and go all in to acquire some of their .rar sours or whatnot. Stupid serpent with it’s forked tongue. In the meantime, I’ll be keeping an eye out for that Brett dosed Devotion that sounds rather yummy. Also got another bottle of Red Poppy, which is just superb.