Forest & Main is one of those newish (class of 2012) local places I keep meaning to check out, a tiny little brewpub settled into a restored 1880s-era house. It’s up in Ambler, PA, which really isn’t that far, but I just haven’t made the effort. Fortunately for me, one of my employees gave me one of their ultra-limited bottles for Christmas (a most unexpected and pleasant treat – she has good taste!) A 10% wild tripel aged in wine barrels, this thing has some serious legs. Oubliant comes from the French for “to forget”, and if you had a few bottle of these, you’d be pretty forgetful. I only drank one, though, so I was able to record some notes for posterity: 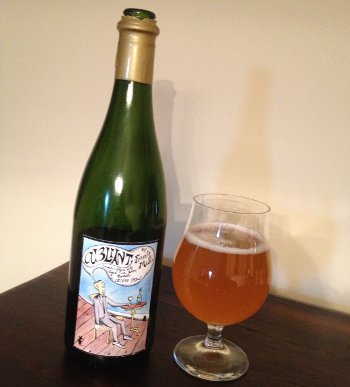 Forest & Main Oubliant – Pours a deep, cloudy golden color with a finger of white head and decent retention. Smell featurs a big white wine component, that twang that indicates sourness, along with a light funk and Belgian yeast aroma. Taste is very sweet, a big fruity vinous character with a nice lactic sourness pervading the taste. A huge oak component emerges towards the finish and into the aftertaste. Maybe some yeasty spiciness too. Mouthfeel is well carbonated, medium to full bodied (that oak character really hits hard), a little acidic. It’s a little sharp and harsh, but that’s not necessarily a bad thing. Overall, this is really interesting stuff, certainly better than the last white wine barrel aged tripel I sampled. I think that big oak character might turn some people off, but I’m apparently a sucker for oak, so I’m going with an A-

Well, I suppose I should make that trek up to Ambler sooner rather than later. Look for a report soon. Well, soonish.