Ever since Oude Gueuze Tilquin made a believer out of me, I’ve been on the lookout for more lambics, with a keen eye to acquire some Cantillon and Drie Fonteinen (aka 3 Fonteinen, which I guess means 3 Fountains or somesuch). These are both classic lambic breweries that have experienced an explosion in demand while not really being able to increase production all that much. It doesn’t help that something like an Oude Geuze takes at least 3 years to produce, not to mention other concerns (Cantillon, for instance, has pretty much maxed out capacity, and given the exigency of spontaneous fermenation, they can’t just open a new brewery somewhere). Drie Fonteinen seems to be the easier to acquire of the two, but I still haven’t seen any of it around in the past half a year or so. I finally broke down and ordered some direct from the source. This cost a pretty penny, but from what I understand, there’ve been issues with people charging outrageous prices for this stuff, so it was probably worth it (thanks to Rich for the link).

What we’ve got here is the “basic” Oude Geuze. Scare quotes because while 3 Fonteinen has their fair share of one-offs and rarities, this is still a blend of 3 year old, 2 year old, and 1 year old lambic, which is no joke to the tune of being a top 100 baller on BA. I’ve got fancier stuff stashed away for later, but let’s not get too carried away. Here goes: 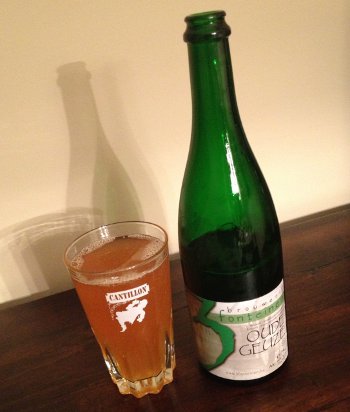 Drie Fonteinen Oude Geuze – Pours a deep golden color with half a finger of white, bubbly head. Smells of twangy funk and oak. Taste has lots of that funky Brett character, a pleasant sourness, and lots of oak too. Well balanced flavors here, with no component overpowering the other. It also evolves well as it warms. Mouthfeel is medium bodied, plenty of carbonation though it does seem a little light for the style. Has a more winelike character than I’m used to. Not that that’s bad. Overall, I could get used to these Oud Geuze things. I don’t like this as much as the aforementioned Tilquin, but I’ll still plant a firm A- on this sucker.

Up next in my summer of lambic will be some sort of Cantillon (probably the Kriek), but I’ve got a bottle of 3 Fonteinen Golden Blend that is just begging to be opened.