This one’s going to live up to its name, so stay frosty folks: Dock Street describes this as a “Vatted porter blended with a small dose of Prince Myshkin Russian Imperial Stout. Aged in an Apple Brandy barrel for 3.5 years with brettanomyces and Cantillon wild yeasts!” So yes, this is certainly full of funk, both figuratively and literally. Lets see if all that funk translates to greatness: 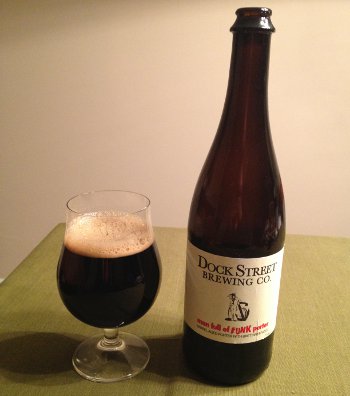 Dock Street Man Full Of Funk Porter – Pours a dark brown, almost black color with a finger of big bubbled tan head that actually has decent retention. Nose is filled with funk and that twang that indicates sourness, quite nice, actually. Taste is less funky than the nose would have you believe, only a very light sourness, just a little oak, but enough that the roasty, toasty porter flavors don’t really overpower the taste either. There’s a slight vinous character that works well enough here, but isn’t super prominent. Mouthfeel is medium to full bodied, with low carbonation, but nowhere near flat(definitely much more here than in the BA RIS or Barleywine, though it’s still low overall). This has a sorta muted flavor profile, but it’s also well balanced. Overall, a solid beer, not something that is going to weaken the knees, but really nice. B+

Not quite the sour funk bomb that I was expecting, but really good, probably my favorite of their barrel aged treatments, but only because it had mildly appropriate carbonation (that BA Prince Myshkin would have been perfect if it wasn’t almost completely still) and I still have one more to try (a Flemish Red, which actually has a pretty good reputation). Speaking of Dock Street, they’re doing another bottle release on Saturday and I plan to pick up at least a couple bottles, so this Dock Street train will continue on.