This beer was once a regular seasonal brew, but it eventually sorta faded away. After a 5 year absence, Yards has brought it back on a limited basis, this year even bottling a few in their brand new 750 ml bottle format. I feel so special. They call it a Belgian style Tripel/Dubbel hybrid, which basically means it’s a stronger than average Dubbel. 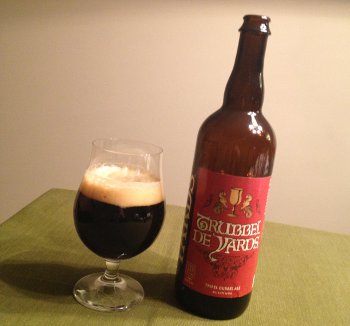 Trubbel De Yards – Pours a dark chestnut brown color with a couple fingers of tan head, solid retention, and plenty of lacing. Smells lightly of spicy Belgian yeast, but also of dark crystal and chocolate malts, maybe some brown sugar character too. Taste very much follows the nose, with a light Belgian yeast character that takes a back seat to a complex malt bill. I’m getting some dark chocolate, molasses/brown sugar, and maybe a hint of dark fruits like raisins (guess: this beer incorporates a not insignificant amount of Special B malt). Mouthfeel is medium bodied, reasonably well carbonated, a little sticky in the finish, strikes a pretty good balance. Overall, a solid, craftsmanlike effort. B+

Not to toot my own horn, but this reminds me of my homebrewed dubbel, which technically came in at a higher ABV than I was really going for, right in the range of this beer.