To a certain type of beer dork, saying that these were bottle releases is probably overselling their significance. Near as I can tell, Dock Street doesn’t actually distribute their bottles, and Victory is doing a limited distribution in the general region, but in practice, these releases consisted of my walking up to a counter and asking for a few bottles. No waiting in line for hours (in the rain!) like some bottle releases, just good beer and friendly conversation.

Things kicked off with Dock Street Brewing’s annual holiday release of limited brews last night. They claimed that only around 2-6 cases were available for each variety, so I was a little wary, but I got there early enough to get everything I wanted: 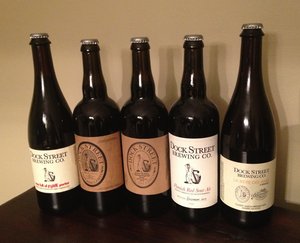 Lots of barrel aged rarities there, some aged for 3+ years. As luck would have it, frequent commenter and newfound beverage compatriot Rich on Beer was also in attendance, along with some other beer geeks, so we engaged in much beer dorkery. I had a good time and it was great to meet up with Rich.

I had a Rye IPA, which was quite a solid, juicy American hopped ale with well matched spicy rye notes, and also a non-barrel aged Prince Myshkin’s Russian Imperial Stout, which managed to exceed expectations. Big beer, light roast, lots of chocolate and caramel, not overly sweet, very well balanced stuff. I’m now really looking forward to the Hungarian Red Wine Barrel Aged bottle I got. I don’t have any pictures or detailed notes, but look for some more detailed reviews in the coming weeks. Dock Street seems like a pretty small operation, but one that I think should probably garner a better reputation… at least, based on my limited exposure, which is admittedly small.

I’ve already mentioned this morning’s bottle release, Victory’s Red Thunder. This day-before-Thanksgiving release slot was occupied by Dark Intrigue last year, one of them wait in line, braving the elements kinda releases. This year was significantly more subdued. Victory opened early with a special breakfast menu, and the place was indeed as crowded as I’d ever seen it, but it seems most folks were more interested in breakfast than the bottle release (though I think you could order a few bottles from your table). I arrived a little over an hour after opening and there were only two people in line in front of me. I don’t know if anyone lined up before opening, but on the other hand, red wine aged baltic porters aren’t exactly the most hyped styles.

I’ve had the base beer, Baltic Thunder, a few times now, and I’ve always enjoyed it. I’m not a huge fan of porters, but this one is a little bigger and richer, hence the Baltic appellation. I’m hoping the barrel aging will tone down some of those elements as well as add some complexity. Let’s find out, shall we: 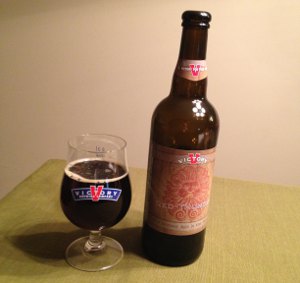 Victory Red Thunder – Pours a dark brown color with pretty amber highlights and minimal, light tan head. Taste has those typical roasted malt and chocolate aromas, but I feel like the fruitiness is much more pronounced than the base beer, presumably from the wine. Even getting a hint of oak in the nose. Taste leans heavier on chocolate, vanilla, and caramel than roasted malt flavors, and that oak is definitely contributing a richness to the whole affair. I’m not picking up much in the way of red wine in terms of fruity flavors, but there’s a pleasantly dry astringency that comes out in the finish that works quite well. Tannins and all that (probably just as much an oak thing as a wine thing). Mouthfeel is medium to full bodied, well carbonated, a little mouth-coaty with a long finish. It’s no quaffable session beer, but it’s not quite a sipper either. The alcohol is reasonably well hidden, and it’s all rather well integrated and balanced (unlike the recently reviewed Mikkeller Black Hole beer, though I think that had its charms as well). Overall, I really like this beer a lot. I can see porter fanatics being disappointed by the toned down… porterness… of this beer, but it worked well for me. Admittedly, I’m not a huge porter fan, so take this with a grain of salt, but I consider this an improvement over the base beer. B+

Good stuff. Probably not going to inflame the passions of your typical beer nerd, but it hit the right notes for me. All told, I’ve had a pretty cool couple of days here. And when combined with my yearly holiday beer purchases and a couple upcoming trades, my cellar is reaching capacity. Well, not really, but I should tone things down for a bit while my liver catches up to my acquisitions. This will, of course, be chronicled right here, so stay tuned. Gonna be an interesting few months…

Update: Dropped Red Thunder to a B+. Still very good, but I was perhaps too enthusiastic upon first taste…