So I’ve been strangely neglectful of this style of late. Unless you count beer clubs or near-abominations, I haven’t done a proper tripel review since… January (and while it had fantastic fancy packaging, the product was rather lackluster). So let’s take a break from the realm of trendy limited-edition, imperialized, barrel-aged, face melting dark beers and hit up a readily-available classic that I’ve never had before.

Brouwerij Bosteels claims this is “still brewed to an authentic beer recipe from 1679” and they call it a tripel more because this monastic recipe uses three kinds of grain: wheat, oats, and barley (though it fits the more general guidelines of the style as well). Well sure, I believe that beer made before anyone knew what yeast was would taste exactly like what I’m drinking today. Why not? In seriousness, this is one of the best reviewed tripels in the world, right behind the style codifiers like Westmalle and St. Bernardus (and those upstart Canadians with their La Fin Du Monde). It’s kinda inexplicable that I’ve waited so long to try this, so here goes: 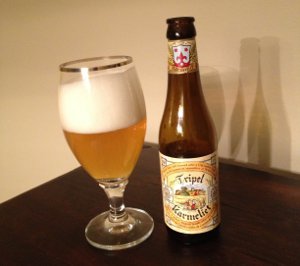 Tripel Karmeliet – Pours a bright, slightly hazy yellow color with a massive, 4 finger head and lots of retention. Smells of spicy, musty Belgian yeast, some clove and plenty of light fruit character, like banana and pears. Taste has a huge spice component, again with the clove, but also a softening blow of musty Belgian yeast and that fruit character brightening things up in the finish. Mouthfeel is hugely carbonated, effervescent, but also crisp and refreshing, with a very dry finish that keeps the booziness down. Overall, this is some seriously great beer. Easy to drink, but packed with flavor and extremely well balanced. A

I’m kinda shocked at how well this hit the spot. Maybe I should slow down with all this barrel aged nonsense. Haha, like that will ever happen. Also happy that I didn’t have to drink this out of a green bottle that’d been sitting in the window for months on end. Seriously guize, I know there’s not much in the way of hops in this, but green bottled beers do seriously deteriorate quickly. Give us a break. Fortunately, the smaller bottles are brown. This makes no sense, but I’m not going to question it.