Tired Hands Brewing Company continues to be the most interesting new local brewery around here, and it seems I’m not the only one on board. Apparently Tired Hands is in the frontrunner for RateBeer’s coveted New Brewer of the Year award. Despite only having launched a few short months ago, Tired Hands’ brews hold six of the top 10 spots on RateBeer’s charts. Score one for the home team, let’s have a look at some more of their beers: 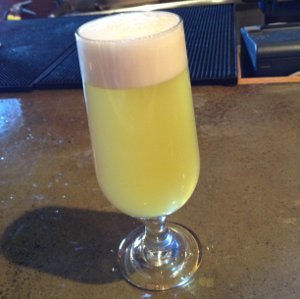 Tired Hands Single Hop Saison (Nelson Sauvin) – The second in a series of beers showcasing different hop varietals and blurring the line between saisons and IPAs. Last time I was at Tired Hands, I was most pleased with the Simcoe version, and now I get to try the one made with New Zealand hops known as Nelson Sauvin. Pours a very light, cloudy straw yellow color with a finger or two of head… Smells utterly fantastic, bright citrusy fruit and some floral notes matched with a hint of bready, spicy yeast. Taste packs a whole lot of flavor, lots of that juicy citrus hop character and saison yeast spice come out to play, punctuated by a dry, earthy bitterness in the finish. The mouthfeel is a little low on the carbonation… It’s still really good, but I wish there was a little more here. Easy enough to drink, and certainly a solid offering, but I enjoyed the Simcoe slightly more… on the upper end of B+ 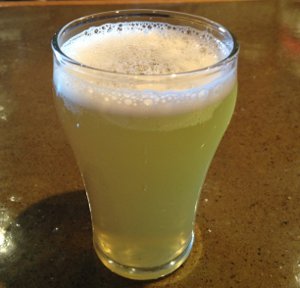 Hophands – This is one of their sorta flagship brews, a rather light pale ale that’s quite well balanced. Another straw yellow beer, slightly cloudy, finger of bubbly head. Smells of grassy, citrusy, piney hops, not quite as potent as the Nelson Sauvin Saison, but well balanced citrus and pine aromas with a bit of floral character. Taste is light and hop forward, again with the combo of citrus and pine and grassy hops, some low intensity bitterness in the finish. Mouthfeel is crisp and light, very easy drinking, downright quaffable stuff. Clocking in at 4.8% ABV, I could drink this all night. Overall, a really nice pale… that I should really try by itself some time. Provisional B+ 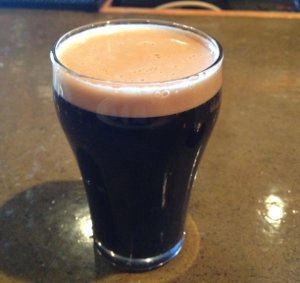 Tired Hands/Stillwater ArtiSnale – A collaboration with Stillwater Artisanal and a most excellent local beer bar (if you read this blog, you’ve seen lots of pictures of beers from this place), Teresa’s Next Door (which is really just down the road a bit from Tired Hands). This is a big stout brewed with… snale shells? Ah, I see what they did with the name there. Kinda riffing on oyster stouts, I guess. Pours a very dark brown color with a finger of light brown head. Smells of roasted malt and coffee. Taste follows the nose, lots of roasty malt and coffee flavors, but the finish takes a light, sweet, pleasant turn that I can’t quite place. In RateBeer’s newsletter, they mention that there’s “a touch of salinity, likely from the usage of escargot shells” which is probably what I was detecting in the finish there. Mouthfeel is medium bodied, making this drink like a smaller beer, but that’s actually very nice. Not my favorite beer evar, but very well crafted stuff and apparently the snales actually added something to the proceedings. B+

I apparently just missed out on Vampire, their Halloween-themed IPA brewed with blood oranges that seemed to be turning heads. Ah well, the joys of the small local brewpub – no way I’ll be able to keep up with all their brews, but it’s probably worth trying!