After three weeks in the fermenter, I finally bottled the Abbey Dubbel. Near as I can tell, the fermentation took off like a bat out of hell. Bubbles started appear in the airlock after just a couple hours, and less than a day into the process, I noticed this: 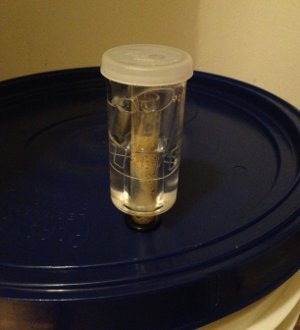 Yep, the yeast was so active that it took up all the headspace in the bucket and was infiltrating the airlock. Apparently this happens often in cases like this (high flocculation yeast with tons of sugar to feed on, as this is a big beer), sometimes even building up enough pressure to blow the lid off the fermentor (and spew yeast/beer all over the place). In an effort to forestall disaster, I removed the airlock and installed a blowoff tube. A couple days later, the fermentation had died down and I reinstalled the airlock for the remainder of the fermentation period. Things definitely slowed considerably after that initial week, to the point where I’m not sure the extra week was needed, but I figured better safe than sorry. 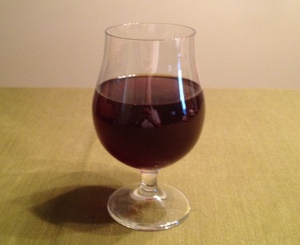 The beer ended up being a little darker than expected, but not at all out of character for the style. A dark amber color, actually very pretty when held up to the light (which you can’t really tell from the image above). It’s got that typical Belgian yeast aroma of spice and dark fruit, and the taste bears that out, though I think this could really use a healthy dollop of carbonation.

Final Gravity came in at around 1.014 or 1.015. If my calculations are correct, this has yielded somewhere on the order of 8.4% ABV – 8.7% ABV. Way bigger than I was going for (probably outside of style guidelines too), but not entirely unwelcome. Given an OG of 1.079, this works out to an 81.3% attenuation, which might be my record for highest attenuation on a batch (partially explaining the higher than expected ABV).

One other thing I tried when bottling the last few bottles: I added some cinnamon, clove, and pepper to the remaining beer in the bottling bucket and swished it around a bit. There wasn’t much left, but I wanted to see if that treatment would actually come through in the resulting beer, which could be a sorta faux Christmas ale if it works (though I’ll probably do another batch of that this year as well). I got about 6 bottles out of that (with a little more than a case and a half of the regular dubbel).

That just about wraps up this beer. All that’s left is the conditioning, after which we’ll sample on a weekly basis. I’ll try to ensure I review it in a timely fashion (unlike most of my other brews!) I’m really looking forward to this one! Up next, I’m thinking about going for a highly hopped Imperial Red. I’m having trouble finding recipes for this, so if you have any, feel free to drop a comment. After the Red, I’m looking at a couple other options. Maybe a barleywine or maybe another Christmas ale. And I need to make another batch of IPA at some point too. To many beers, not enough liver strength.