Not content with being the least coherent style in the history of beer, it appears that there are also multiple ways to spell “saison”. This is unsurprising though, owing to the fact that “saison” is just French for “season”. Now, why Logsdon went with the Dutch spelling is a bit of a mystery, but who cares? This is an awesome beer – the biggest surprise of the year so far. Not that I was expecting it to be “bad” or anything. This was yet another in the cross-country trade with Jay, and he gave this thing a stellar writeup on his blog, so I had high hopes… but as saisons go, this is one of the funky variety, dosed with Brettanomyces. I haven’t had a ton of this particular sub-style of saison, but I’ve had some supposed world-beaters like Saison Rue, and while I’ve enjoyed them, I’ve never been really been blown away by one. Until now: 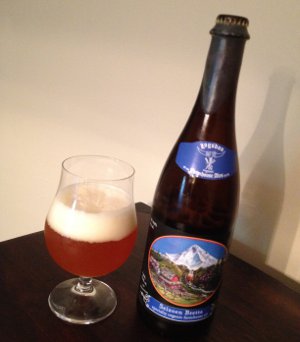 Logsdon Farmhouse Ales Seizoen Bretta – Pours a cloudy orange color with a couple fingers of fluffy white head. Smells wonderful, lots of light fruity aromas along with some spiciness (both presumably due to some sort of Belgian yeast) and a well balanced, earthy Brett funk. Tastes amazing too! Starts off sweet and spicy, a little juicy fruitiness in the middle (maybe a hint of wild yeast twang there), and earthy Brett funk in the dry finish. Definitely not sour, but maybe a really light tartness (which I may be attributing more to fruitiness than tartness, but whatever). Mouthfeel is highly carbonated and effervescent, but not harsh or overpoweringly so (the way a lot of yeasty Belgian style brews can be). Medium bodied with a beautiful, dry finish. Overall, utterly fantastic saison, probably my favorite “funky” saison ever. Superb. A

Logsdon Farmhouse Ales is apparently the brainchild of David Logsdon, who made his way into the craft beer world by founding Full Sail Brewing way back when, but if this new brewery is any indication, I can’t wait to see what they do. Heck, this single beer is pretty darn spectacular, I’d be happy if they just started distributing out East! In the meantime, I’ll just have to see if I can get my hands on another of these things. I think there’s a pretty good chance this thing could garner the vaunted Kaedrin A+ rating, but I don’t hand them out lightly, and usually force myself to have at least a few separate tastings before giving them out.