Apparently weasel poo is not involved with this beer at all. Not that it normally would be a key ingredient, but the last beer I had in Mikkeller’s Beer Geek series of imperial stouts did have that improbable ingredient… and it was spectacular. This time around, in place of poo, we’ve got hops. Unfortunately, I think my bottle had been sitting around for quite while when I bought it, and thus I suspect the hop profile was somewhat diminished: 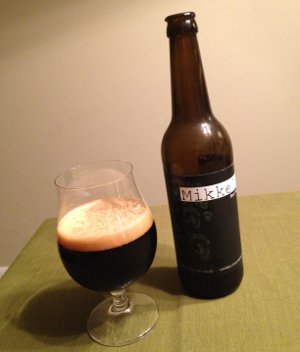 Mikkeller Beer Hop Breakfast – Pours a thick black in color with a couple fingers of light brown head. Smells of light roast, caramel and chocolate, with some piney hops apparent (but not quite as prominently as I was expecting). The roastiness comes out much more in the flavor, along with some coffee and bitter dark chocolate in the finish (the additional hops may also have been a contributor to the bitter finish). Not quite as much hop flavor as I was expecting, but it’s clearly more of a hoppy beer than the Brunch Weasel. Mouthfeel is definitely less full than the Brunch Weasel, thinner, but not watery or anything, with a dry finish. Overall, it’s a nice beer, but I wish I had a fresher bottle. I’ll give it a provisional B, but it could go either way.

Mikkeller remains one of my favorite breweries, so I’m sure you’ll see some more of their stuff popping up here soon. I think I have a red wine barrel aged stout from them somewhere in my cellar, which I’ll probably bring out to play when it gets a little colder out…