Meet Almanac Beer Company, a tiny Northern California brewery specializing in seasonal ales brewed with local ingredients. Up until recently1, this meant the brewery produced only one-off beers, one per season. In a world where it seems most breweries boast a portfolio of 50+ beers, it’s kinda refreshing to see a brewery that makes one beer per season, period. They’re apparently contract brewers, but their reputation seems more like that of a gypsy brewer. In other words, they have a pretty darn good reputation.

Of course, being a local-obsessed brewery has its drawbacks, namely that it’s only really available locally… but thanks to the magic of beer trades, I got my greedy little hands on their 2012 offerings. So a tip of the hat to Jay from Beer Samizdat, who I must admit, is the one who got me interested in this brewery and their awesome, classy labels long before the trade ever came up. This particular beer is their Winter offering, a Belgian style Wit brewed with three varieties of early-season oranges and a helping of ginger root. Now, one doesn’t typically think of this style when talking about Winter beers, but on the other hand, at 7% ABV, it’s certainly heftier than most examples of the style (without going overboard).

Also, what the hell, it was August when I ended up drinking it, so it fit in quite nicely as I fired up the home theater system for some action packed adventure in the form of The Raid. I should mention that I’m almost always watching a movie whilst drinking2, but the pairings don’t always strike me enough that I want to post about it. In this case, the light, refreshing Wit contrasted rather sharply with the bombastic action, making it a memorable combo. So let’s get to it, shall we? 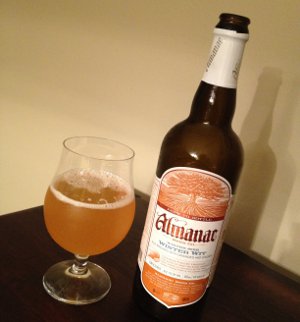 Almanac 2012 Winter Wit – Pours a cloudy straw yellow color with a finger of bubbly head. Nose is filled with wheat and spice, some orange peel or other citrus character. Taste has a moderated sweetness along with all of those spices from the nose (apparently ginger, but I also get the typical Wit notes of coriander and clove) and a well integrated citrus component. Mouthfeel is well carbonated, just a hint of spicy bite, and a relatively light body. This thing doesn’t drink like a 7% ABV beer, it reads much lighter to me. This is a good thing, as the other “big” wheat beers I’ve had get to be overbearing – completely overwhelming the delicate wheat flavors. Overall, this is a well crafted, tasty take on a style that often feels muted. Right up there with my favorite Wit beers…B+

I’ve also got a bottle of Almanac’s Spring 2012 Bière de Mars, which I’ll probably be cracking open sometime in September, as the weather starts to chill up a bit.

1 – They’ve just released their year-round California Table Beers (a saison and pale ale), but I think the focus continues to be on their limited seasonal wonders…

2 – I used to talk about this more often than I do now, with the notable exception of Double Feature posts… which, come to think of it, have been pretty sparse of late. I shall have to rectify that, but at the same time, this is a beer blog, not a movie blog, so I expect that side of things to continue to fall by the wayside, with occasional mentions like the one in this post.