I had a sample of DuClaw’s regular Naked Fish beer at a beer club outing a while back. It was a solid beer to have in such a setting, as it’s got a unique profile and an interesting concept. It’s a raspberry stout, and while the aroma really sold that fact, I found the taste to be a little too thin (which wasn’t surprising once we realized it was only 4.6% ABV). It was a fine beer, to be sure, but I would have loved it if it had a fuller body with more richness in flavor. So when I saw Double Naked Fish (a souped up version of the brew with 7.6% ABV) on the shelf during a recent beer hunting expedition, it seemed that fate had interceded. This seemed like a good idea, so let’s see how it all turned out: 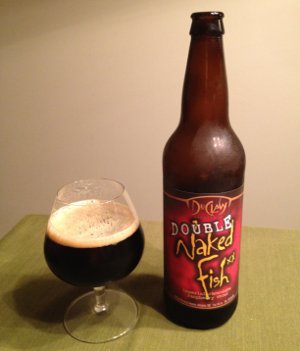 DuClaw Double Naked Fish – Pours a clear and very dark brown color with a finger of big bubbled tan head. Smells of roasted malts, with some raspberry fruitiness and maybe caramel and chocolate coming through as well. Taste has that roasty component, but it’s quickly taken over by a bright raspberry fruitiness, followed by a dry bitterness from hops, chocolate, and roastiness in the finish. Mouthfeel is highly carbonated, but somehow thinner and more dry than I’d expect. I’d think this souped up version would have richer, fuller bodied flavors, but this is light and dry. It feels like an amped up Irish Dry Stout, rather than any sort of imperial stout. This may be more of a personal preference thing, as Irish Dry Stouts aren’t my favorites, though they certainly hit the spot from time to time. Overall, it’s an interesting beer, a slight improvement over the single Naked Fish, but still not quite transcendent. B

DuClaw is still an interesting regional brewery. Not sure if they even distribute to PA yet, but I picked up a few bottles from them during a trip to Maryland (their home state). My cellar has once again grown into something of an unwieldy state, so I’m not sure when I’ll get to these, but I’m sure they’ll be on the blog soon enough…