Also known as: that beer made with weasel poop coffee. Yes, this beer is made with civet coffee, one of the world’s most expensive varieties. Apparently, coffee berries are fed to weasel-like civets and are thus passed through their digestive tract. The idea here is that the coffee beans are exposed to various enzymes in the process, helping break them down. But not too much, as the beans retain their coffee-like properties, just with a different, supposedly less bitter character. There’s apparently a lot of controversy surrounding the coffee due to the novelty factor and also the ease with which “fake” civet beans are put on the market. Oh, and the fact that people are drinking coffee made from poo. Ok, fine, the coffee is apparently washed and roasted, but still. Weasel poo.

And of course, leave it to Mikkeller to make an exceptional beer with this stuff. He’s got a whole series of Beer Geek stouts, mostly brewed with various coffees. Not being a big coffee person (poo or no poo), the beer never really made it past my radar, but I eventually broke down and got a couple bottles from the series to see what all the fuss is about. Well, I’m glad I got over my hesitation, because this stuff is great: 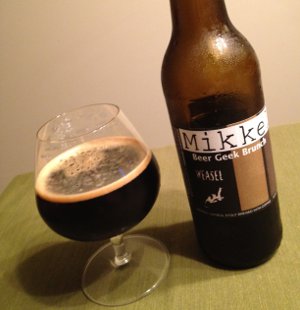 Mikkeller Beer Geek Brunch Weasel – Pours a very dark brown color with a finger of light brown head. Smells fantastic, very rich dark malt aromas, caramel, booze, maybe a little roast (but not much). Taste also features those rich dark malt flavors, much more coffee and roast character than the nose would indicate (but not overpowering or anything), plenty of caramel and chocolate, and maybe a hint of booze. The finish has some balancing bitterness, some of which is coming from that coffee (rather than all hops – though if wikipedia is to be believed, the bitterness is less pronounced than regular coffee). Mouthfeel is thick and chewy, full bodied, low but appropriate carbonation and just a little stickiness in the finish. Alcohol is very well hidden here. Towards the end of the bottle, the yeast got a little clumpy, which wasn’t great, but only really impacted a small portion of the bottle. Overall, this is expertly crafted stuff and while I don’t normally go in for coffee in my beer, this one is fantastic. A-

Up next on the wallet-lightening train of Mikkeller beers is Beer Hop Breakfast – basically a similar beer, sans poo, plus tons of hops. All aboard!