So here we go, tapping that hotbed of beery goodness, Wisconsin. In all seriousness, these Central Waters folks have quite the reputation, most especially for their bourbon barrel stuff, which, you know, goes a long way here at Kaedrin. They’re also apparently one of them green-powered eco-hippie breweries. My eyes kinda glaze over when I read stuff about that, but from what I gather, the fine folks of Central Waters have invented a race of solar-powered, sentient robots to do all the brewing. The people of Wisconsin are quite industrious and may indeed be architects of the robopocalypse. That, or I have poor reading comprehension. Anywho, let’s drink some beer: 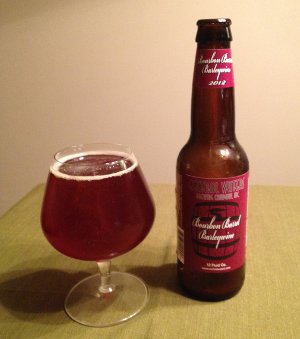 Central Waters Bourbon Barrel Barleywine – Pours a deep amber color with minimal, whitish head. Smells full of bourbon and caramel, with heaping helpings of vanilla and oak. The taste follows the nose pretty well – tons of rich caramel malt flavors, lots of intense, boozy bourbon, along with a little well-rounded vanilla and oak. Some fruity notes open up as it warms. Very sweet, but not quite cloying. Mouthfeel is full bodied, thick, a little light on the carbonation (though not too light at all), a bit of sticky booze in the finish, and a pronounced warming effect from the 11.5% ABV. Overall, pretty much everything you could want from a bourbon-barrel aged barleywine. A-

Nice first impression of the solar-powered wizards from Wisconsin, definitely hoping to get my hands on more of their stuff.