I’ve been at this blogging thing for a little while now (almost two years), and I’ve obviously been drinking beer for a long time before that… but this appears to be my first wheatwine. It’s basically like a barleywine, but with a large proportion of wheat in the malt bill. I suppose the closest thing I’ve had to this style is Great Divide’s Double Wit, a beer that didn’t quite work for me. It was fine for what it was, but it felt overly boozy and unbalanced. Will The Bruery be able to tame those issues in this decidedly stronger brew?

To be fair, this stuff is also quite a bit more complex than any of the big wheat beers I’ve had before. It’s a blend of the Bruery’s excellent hoppy Belgian pale ale, Mischief, and a wheatwine that’s been aged in Bourbon barrels (apparently they did release some of this barrel aged wheatwine all by itself, called White Oak Sap). So yeah, sign me up for this thing. 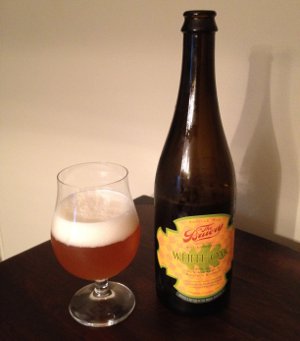 The Bruery White Oak – Pours a cloudy golden orange color with a few fingers of fluffy white head. Smells strongly of wheat and musty Belgian (or perhaps weizen) yeast, a little of that banana and clove character you’d expect in a Hefeweizen. The taste is sweet and very spicy, with some interesting vanilla and light caramel notes emerging in the middle, and a low intensity bourbon oak character (maybe some vanilla too) coming towards the finish. Not getting a lot of wheat in the taste, though perhaps it contributes to the mouthfeel. The bourbon barrel character adds complexity here without dominating the flavor, and I’m realizing that I don’t often have barrel aged light colored beers… (I’d like to compare this to Allagash’s Curieux). The mouthfeel starts off highly carbonated and spicy, eventually yielding to a small but mostly pleasant sticky sensation in the finish. It’s a little heavy and drinking a whole 750 is a bit much, but overall, I’m actually quite pleased with this. It’s very complex and tasty. I wouldn’t quite call it well balanced (which keeps this from mind-blowing territory), but it’s unbalanced in just the right way to make it interesting and delicious. B+

Not long after having this, a local bar did a Founders event, and at the behest of the cute girl sitting next to me, I got a taste of their Wheatwine. It was interesting, though I ultimately didn’t get me a full glass (there were other interesting rarities available, including KBS and another beer you’ll be hearing about, er, at some point on the blog). Anywho, The Bruery never fails to impress. I wouldn’t put this at the top of their lineup, but it’s a solid entry worth trying (but, you know, split the bottle with someone). I’ve got a few big Bruery beers in my cellar that I should break out at some point, but it’s always tough to pull the trigger on a 750 of high ABV beer…

2 thoughts on “The Bruery White Oak”