On the first Friday of every month, there’s a beer blog roundup called The Session. Someone picks a topic, and everyone blogs about it. This month, Carla Companion wants to talk about an unsung hero:

What is the one beer style usually makes up the first position in the sample flight, but yet is usually the one that we never get really excited about? The Pale Ale.

First of all, I love the idea. One of the cornerstones of this blog is that of the Double Feature. Pick two beers of similar style, compare and contrast, all whilst taking in a filmic double feature. It’s a really helpful tactic for learning about beer, especially when used with beers that sometimes have very similar flavor profiles… like pale ales!

Pale ales have a weird rap here in the beer nerd community. You never hear people raving about pale ales the way they do for the latest hopped-up double IPA, face melting Imperial Stout, or Brett-dosed sour bombs. And yet, a lot of folks will tell you that they got into craft beer the moment they tasted something like the classic Sierra Nevada Pale Ale. Indeed, a lot of breweries got their start with pales, even ones we think of as being extremist or weird. Stone’s first beer was their most excellent Pale Ale (which seems to me like Arrogant Bastard’s little brother, very flavorful). Hard as it may be to believe, Dogfish Head’s Shelter Pale Ale was their first foray into “off-centered” beer. Pale Ales are a cornerstone of the craft beer world, a stepping stone for fledgling beer geeks, and a fantastic alternative to macro light lagers for regular folks.

Indeed, it’s not like there’s a shortage of big selling pale ales. Locally, we’ve got Yards’ Philly Pale and Victory’s Headwaters, both of which apparently do gangbusters (and oh yeah, they’re excellent too). I’m no stranger to huge face-melting beers and I have to admit that sometimes the notion of checking out a “simple” pale ale seems like it might be boring, but there’s plenty of interesting stuff going on in the pale ale world right now. I didn’t go bonkers for Maine’s Peeper like most folks, but it was an intriguing change of pace, a very interesting beer. Even if it wasn’t particularly my thing, I love that they did something different with their beer, and that’s the sort of stuff I like to try.

Speaking of which, I think it’s about time to try out a few beers, as ordered. One is eminently interesting and experimental, the other is a bit more on the standard side, though it’s got some interesting aspects too… 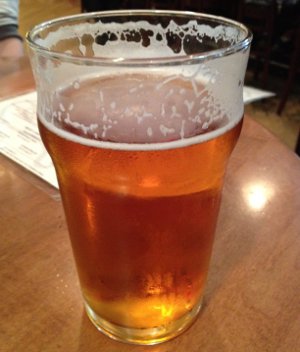 Victory Bavarian Mandarina Pale Ale – Victory recently released a series of beers utilizing experimental German hops, including this one, which has just received it’s official name: Mandarina. Pours a golden orange with a finger of head and a ton of lacing. Smells of herbal, spicy hops, with a an orange citrus note and a little caramel malt too. Taste has a nice malt backbone, but it’s not huge – it provides a nice background to highlight these new hops. Plenty of those citrusy, herbal hop flavors coming in the middle and more spicy bitterness emerging in the finish… Mouthfeel is surprising for a pale ale, a little heavier than expected, but quite nice nonetheless. This is actually the second time I’ve had this beer in the past couple weeks, and on the second tasting, I think I got a lot more of the orange character than the first time. Overall, a very solid, interesting change of pace. B 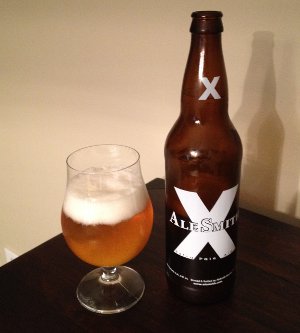 Alesmith X – Pours a bright straw yellow color with two fingers of fluffy white head and some lacing as I drink. Smells of more grassy, citrusy hops, along with a nice bready yeast and malt character. Taste is sweet, with that bready yeast and malt really coming through, though not in a strong or overpowering way. Light grassy hops and citrus come through a bit in the taste as well. The finish is relatively dry, with a very slight bitterness. The mouthfeel is hit with a huge carbonation at the start, very effervescent, but it smooths out by the finish, which is quite nice. Despite the bite from the carbonation, it’s a light, crisp, and refreshing beer. In a lot of ways, this reminds me of a Belgian style pale ale (I bet if you were to substitute something like a saison yeast in the same recipe, you’d end up with a similar, if a bit spicier…), but it still feels like an American Pale Ale. Overall, I’m really enjoying this beer! B+

Overall, the Alesmith was lighter in color and body than the Mandarina, and it had a more traditional, grassy citrus pine hop character, while the Mandarina hops brought a specific orange character, with lots of more herbal notes. Both are very good beers, and I’m really happy I got to try them. I also got to try one of the other Victory beers that was experimenting with new hops, this one called Polaris. It was an IPA, and thus not suitable for this post, but it was quite good, reminiscent of those New Zealand hops I’ve been digging lately. I love that Victory is playing with experimental hops, and the Pale Ale format really does provide a good platform for highlighting these new varieties. As summer goes on, I’m sure pale ales will be a staple of my beer diet…