So Philly Beer Week is here, and of course, I’m too lazy to get my butt into the actual city proper, but fortunately, there are plenty of events out here in the burbs. On Saturday, I actually hit up two locations, the first being Pinocchio’s, who had a bunch of Firestone Walker stuff on tap. It wasn’t a big event or anything, though earlier in the day, they had tapped a keg of Velvet Merkin, an apparently very rare (at least, ’round these parts) and very unique bourbon barrel aged oatmeal stout. The base beer is only 5.5% ABV, but the angels must be damn thirsty, as the barrel aging seems to raise it up to around 8-8.5% or something. Unfortunately, I didn’t realize that folks would be lining up outside the place before it opened to get a taste of this stuff, so I missed out.

So I had to make do with a glass of Parabola (I know, boo hoo, right?), another bourbon barrel aged stout, this one clocking in at an impressive 13% ABV (it was, uh, the only thing I had for a few hours on Saturday). Unfortunately, I seem to have neglected the picture of this one, so you’ll have to use your mind’s eye to visualize from these scintillating tasting notes, hastily tapped into my phone one handed as I browsed the bottle shop’s wares:

Firestone Walker Parabola – Pours a black as night color with practically nonexistent head (there was a ring of brownish stuff clinging to the side of the glass, but not much going on with the rest). Smells of strongly of bourbon, chocolate, caramel, vanilla and oak. Taste is full of that same rich caramel, vanilla, bourbon and oak, with some chocolate for good measure. Mouthfeel is rich and velvety, low carbonation, but enough to keep it from being cloying. I had no idea this thing was 13% as I was drinking, but I kinda felt that way at the end of my (fortunately small) glass. Overall, fantastic beer, something I hope to get some more of at some point… A-

So I hung out at the shop for a while, shot some shit with the locals and beermongers, picked out a few bottles to take home, grabbed a piece of pizza and and glass of water to calm myself down, then I headed over to Wayne, PA for the Main Line Jazz and Food Fest, where Teresa’s Cafe (one of my favorite beer bars) was doing a big Tröegs tasting. Wayne ave was closed off for a block or so, and a bunch of local restaurants and other businesses set up tents and tables and whatnot, along with a live jazz band playing on the stage. It was a pretty low key, family friendly affair, but the weather was gorgeous and beer was flowing like wine!

Ironically, my first beer was not even a Tröegs – when I spied some Sierra Nevada ExPortation (a porter aged in barrels over at Russian River), I had to make sure I got some, as it was my first sour revelation and I thought I’d never see the stuff again (it was a one time Beer Camp brew, though perhaps they’ve made more batches for beer week). It was excellent, though I think some of the other sours I’ve had this year might outrank it (stiff competition though). If you get a chance to try some, you totally should.

Ad this point, I hunkered down for some dinner, and ordered me a Brotherly Suds, a special Philly Beer Week collaboration between Victory, Sly Fox, Yards, Iron Hill, Stoudts, Nodding Head, and Tröegs (who hosted the brewing session). It apparently started out as a Vienna lager… but then they used a Kölsch yeast (i.e. an ale yeast), American hops (Centennial and US Tettnanger), and rye. It seemed more like a Kölsch or British Pale Ale to me, though. Unfortunately, I came away a bit underwhelmed: 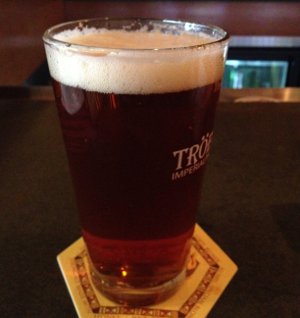 Brotherly Suds #3 (Tröegs Scratch #67) – Dark amber color with a finger or two of head. Smells a bit like a British pale ale, lightly fruity, some grassy, earthy hops. Taste has some nice complexity, some delicate fruit and hop flavors, maybe some light spiciness, but it’s all rather muted, and it’s got that British pale ale or Kölsch feel that I don’t usually care for. Mouthfeel is nice, surprisingly light bodied. Overall, it’s ok, but not my thing… I probably shouldn’t have drank this after the ExPortation – it actually would have made a nice walking around outside beer, but not so much as a complement to dinner. B-

And finally, after dinner, I headed back outside for some browsing and Jazz and walking around and whatnots, picking up a cup of Tröegs Perpetual IPA, something I’d not had before, and which was excellent: 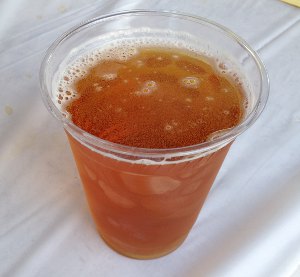 Tröegs Perpetual IPA – Apparently the reason I hadn’t seen this before is that it was a limited seasonal brew, only available in august. Tröegs has recently just moved to new digs, and their expanded brewing capacity means they can now turn this into a year-round brew. Pours a golden orange color with a little head… Huge hoppy pine in the nose, with a little grassy citrus too. Taste has that same huge piney, resiny flavor, a little grassy citrus, and a mild, pleasant bitterness in the finish. Mouthfeel is well carbonated, light to medium bodied, and very easy to put down. Conditions were probably not ideal here, but it was a really nice walking around outside beer. I’ll give it a provisional B+, but it’s on the A- bubble…

Beer Nerd Details: 7.5% ABV on tap. Drank out of a fancy plastic cup.

Well, there you have it: lame, unreliable notes from a day of drinking and merriment. I’m still not sure how many other events I’ll hit up this week, but I’ll definitely be going to a Hill Farmstead event on Saturday (also at Teresa’s)…