So how did my little experiment of brewing a beer with Earl Grey tea turn out? Very well, I think, though the tea itself didn’t wind up being one of the prominent flavors. On the other hand, the citrus came through quite successfully, and I’m sure at least part of that came from the bergamot in the tea. It makes the beer distinct from most traditional English bitters, but it doesn’t overwhelm the more common English flavors and thus retains the feel of the style. It was almost exactly what I was hoping for…

One of the interesting things about homebrewing is that you get to see the full process of how a beer matures and ages. You can try it super-fresh, pre-carbonation even, and then you get to see how bottle conditioning matures it into something different over time. In this case, immediately after fermentation, the beer had some nice citrus aromas and flavors, but it was also quite thin. I like to try one homebrew a week after bottling. It usually takes at least two weeks for the bottle conditioning to produce enough carbonation, but I’m impatient and like I said, I like to witness the process in action. That first week didn’t seem to do a whole lot. There was some carbonation, but the beer ultimately felt really thin and watery, in a very bad way. But something magical happened in that second week, I think, and the beer really came into its own. Despite remaining a light, quaffable beer, it really filled itself out and became a well rounded beer in those second and third weeks. And here at six weeks, it’s still going strong: 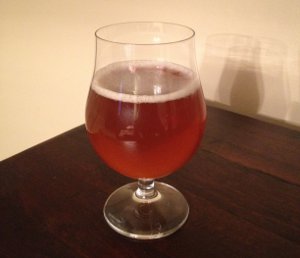 Kaedrin Earl Grey Bitter – Pours a golden orangish color with half a finger of head. Smells of earthy, pungent hops, with some citrus lightening the mood. If I really look for tea, I can kinda find it, but I’m not sure if it’s actually there or if it’s just the power of suggestion. The taste is surprisingly deep and full flavored. There’s a solid malt backbone, with a surprising amount of citrus (I’m pegging that as the orange peel) leading into a light, earthy hop finish. It’s certainly not as earthy as your typical bitter, which was part of the point of this exercise, so I’m quite happy with the taste. The mouthfeel is smooth, well carbonated (I probably could have gotten away with using even less priming sugar), but very light and quite quaffable. The first week I had this, it was awfully thin, but it has filled itself out as it’s matured. Overall, I’m really loving this beer. I don’t get a ton of “tea” character out of it, but there’s plenty of balanced citrus. I count this among the best three batches I’ve made… B+

I’ve actually slowed down my brewing activities for summer. In part this is because I don’t really want to deal with the hot temperatures, but it’s also because I still have a few cases of homebrew in the cellar that I should really drink down before taking on some new batches. I’m still looking to do a Belgian Dubbel style beer for my next batch, which will probably be a really nice Fall/Winter beer.