I see what they did there, and that label is pretty awesome. I don’t know who the two guys are, though they certainly have nice mustaches akin to Mr. Oates in his heydey. But the real genius part of the label is the tiger, which I can only assume is a maneater. 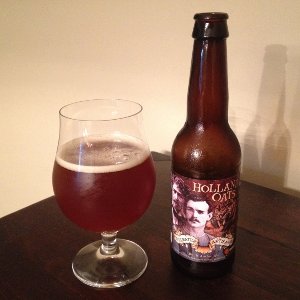 Stillwater/Emelisse Holland Oats – Pours a dark amber color with a finger of light head and some lacing as I drink. Smells strongly of floral hops, with some citrus and resiny pine also evident. It’s also got some rich caramel malt character too. The taste starts sweet, then comes some caramel/toffee notes, followed by those floral, resiny hop flavors, finishing with a light hoppy bitterness. Mouthfeel is great, medium bodied, lightly carbonated, very smooth and almost quaffable. Overall, a very well crafted beer! B+

This was actually one of them gypsy collaborations with Dutch brewers Emelisse, who seem to have a pretty good reputation amongst the beer dorks. I’ve seen them on tap occasionally around town, but haven’t partook in any of their libations. I shall have to remedy that. Also worthy of note, this alternative label design. Heh. Stillwater is emerging as a go to brewer for me, and I have at least one more review in the pipeline for them…