I don’t know how excited I should be about a beer made by someone named “Deviant Dale”. What kind of deviance are we really in for here? Am I going to pop open the can to find a toy snake springing out? Is the liquid inside actually beer (jeeze, I don’t even want to joke about possible alternative liquids…)? Has Dale invented a Ghostbuster-like grid that can store evil spirits in beer cans? The suspense was killing me, but the only deviant thing about this beer is possibly the amount of hops used in its production (and even that isn’t that bad). I don’t know whether to be relieved or not. Perhaps the deviance is slow acting and will hit sometime next year, like an acid flashback.

In any case, you’ll also note in the picture that this is a 16 ounce tallboy can, so I poured out a glass and kept the remainder cool with my fancy new Beerbecue beer cozy (get yours here). Thanks Scott! 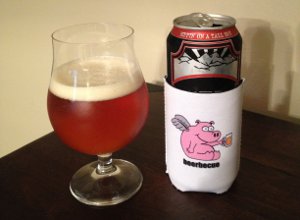 Oskar Blues Deviant Dale’s IPA – Pours a golden orange color with a couple fingers of white head and plenty of lacing as I drink. Smells of sugary sweetness and citrusy hops, with a little pine and resin poking through as well. Taste is very sweet with tons of that citrus and pine hop flavor and just enough bitterness in the finish to balance out the sweet start. Mouthfeel is really nice, smooth, almost creamy, light but well balanced carbonation. Overall, really wonderful beer. B+

Yeah, I’m still a month behind on reviews. After Philly Beer Week, consumption has slowed a bit though, so we’ll catch up eventually, though I’ll probably have some of my more recent reviews up soon too.