It all started with Mikkeller’s Big Bad Barleywine. My keen powers of observation tell me that, in this context, the word “bad” is not actually an indication of poor quality, but rather, of strength! However, Mikkel perhaps thought the beer was not quite bad/strong enough, and thus comes the Big Worse Barleywine, which was then aged it in a bunch of barrels. Some got a barrel formerly used for Red Wine, and some got a former Bourbon barrel, which is what I have here: 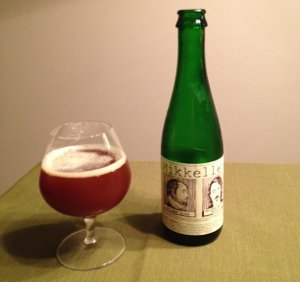 Mikkeller Big Worse Bourbon Barrel Edition – Pours a very pretty, very deep, very cloudy brown color with a half a finger or so of quickly disappearing, large bubbled, light tan head. Smell is filled with bourbon, oak, vanilla, caramel, and maybe a slight fruitiness. As it warms, a little booziness emerges. Taste is very boozy, beyond just the bourbon character, which is plentiful in itself. There’s a lot of caramel and some muted vanilla oak character. Maybe even some dark malts; not quite roasty flavors, but there is something in the finish and aftertaste that is reminiscent of that sort of thing. Mouthfeel is full bodied but smooth. It goes down easily, though you do get some of that warming alcohol feeling too. Overall, very complex, well balanced beer. A-

Still not satisfied with this beer, Mikkeller went on to brew Big Worst, which comes in at a hefty 18.5% ABV. There’s also a version of that beer that was aged in Bourbon barrels that gets up to 19.2% ABV. I can’t say as though I’m all that excited to try those, but I wouldn’t mind getting my hands on the Red Wine Barrel Aged Worse someday.