So just what is a Flying Mouflan? Apparently Siri has the answer:

Fortunately, it’s the beer that counts. In this case, the beer started out as part of Tröegs experimental Scratch Series, and it’s the first of those beers to have been incorporated into their regular roster (though I think it’s still a seasonal beer). 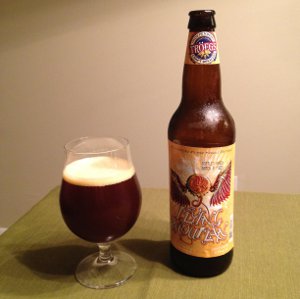 Tröegs Flying Mouflan – Pours a dark reddish brown color with a finger of head. Smells very sweet, with plenty of citrus and pine hop character, along with some big caramel malt aromas. Taste is sweet, lots of caramel malt, plenty of that citrus and pine hop flavor, but not a ton of bitterness. That blending of flavors really works; it’s almost like caramelized hops. A little bit of pleasant booze, but again, all of these flavors are very well balanced, which is impressive for a 100 IBU beer. Mouthfeel is medium to full bodied, smoothly carbonated, and just a bit of stickiness in the finish. Overall, I actually got a Nugget Nectar sorta vibe, but it’s heavier and more powerful than that (in a good way!) A-

By complete coincidence, Beerbecue is also reviewing Flying Mouflan today, and his take channels Lewis Carroll. Inspired. I don’t have any more Tröegs lying around, but I’m always on the lookout for those scratch beers. Who knows, maybe I’ll stumble on the next one that transitions to their regular lineup!