Well, folks, it’s been a long week, and while I wasn’t able to post anything due to technical difficulties, I was (of course) still partaking in some interesting beer. The most exciting thing that happened was a quick Philly Beer Week preview event in which I got to try Brasserie Dupont‘s first collaboration beer, made specially for Philly Beer Week 2012 in collaboration with Iron Hill’s brewer. I won’t belabor the story about how the collaboration came to pass, but while the beer was made specially for Philly Beer Week, I’ve also heard that it will be getting a wider distribution (according to the PBW website, it will be available “coast to coast” after its introduction in Philly).

For the uninitiated, Iron Hill is a local chain of brewpubs that’s become quite popular and well respected around here. I like them a lot, and Dupont makes some of my favorite beers, so I was quite looking forward to this beer: 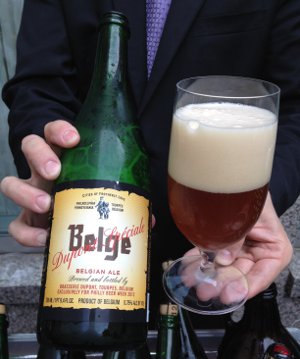 Iron Hill and Dupont Spéciale Belge – I should probably explain at this point that my notes here are sparse, so take this review with a grain of salt. The short story is that I really enjoyed the beer. It’s a pale amberish color with tons of head, but it’s brewed with Dupont’s distinctive yeast, and that pleasant Belgian yeast spice and ester character is the driving force behind this beer. Lots of spice in the nose, and compared to Dupont’s bigger saisons, it’s got a lighter, fruitier felling to it (from the yeast, not the hops). According to the story, it’s made using smoked malt, but I wasn’t really picking up any smoke at all (a friend who was also in attendance didn’t pick up on it either, but I’ve resolved to buy myself a bottle of the stuff and try it again anyway, so I’ll have to look a little harder next time). Light to medium bodied, it’s actually very refreshing, which was really nice because this event was outside and it was quite warm. Overall, a really nice beer. Does it rival the classic Saison Dupont? Well, maybe not, but that’s a pretty high bar to clear. I’ll give it a tentative B+ or maybe even A-, though again, I’d love to try this again.

I’m trying to decide how active to be during Philly Beer Week. A lot of the events are in the city, which aren’t really that convenient for this suburbanite, but who knows, maybe I’ll hop on a train or two and attend some events. Definitely looking forward to the Hill Farmstead event at Teresa’s, but as of right now, I haven’t really planned out anything else for the week.