So I’ve written about gypsy brewers like Mikkeller or Stillwater before, but a recent comment about contract brewing got me to thinking about the differences between contract brewers and gypsy brewers. For the uninitiated, contract brewing is basically outsourced brewing. People who can’t afford breweries themselves find a facility with excess capacity, and leverage that to establish their brand and start building a revenue stream. So I guess the question is: aren’t these gypsy brewers just glorified hipster contract brewers?

Contract brewing has something of a negative connotation amongst beer nerds. There’s a perception that these brewers are cheating and that the final product would be better considered as something made by the actual brewery involved. The extent of the outsourcing seems to be somewhat variable. There are apparently companies that are really just marketing firms that rely entirely on the contracted brewer for the beer stuff (not hard to see why contract brewing would get a negative reputation in that case). Then there are companies that have a little more control over the end result. In reading around about gypsy brewers, it seems like they have a much more active role in the process. They’re physically at the rented facility, making the beers themselves, with minimal involvement of the host brewery.

I suspect we’re going to see the devaluation of the term “gypsy brewer” over the next few years as the marketers pick up on the hype and attempt to exploit it. Pretty soon, we’ll have “gypsy” brewers making beer at a Miller or AB Inbev plant. Riiiight. In the meantime, it appears that folks like Mikkel Borg Bjergsø (Mikkeller) and Brian Strumke (Stillwater) are the real deal, and their beers really show that, like this IPA from Mikkeller: 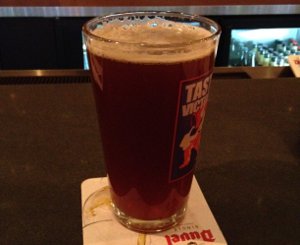 Mikkeller Green Gold – Surprisingly dark amber color with minimal head. Tons of hops in the nose, full of pine, and some citrus too. Taste is also dominated by pine and citrus hops along with a very prominent, dry bitterness that hits in the middle and lasts through the finish. There is a nice malt backbone though, enough to balance out the bracing hops. Lightly carbonated and medium bodied, it’s not quite refreshing, but it’s still easy to drink… Overall, another winner from Mikkeller. B+

This is a relatively straightforward brew (apparently one of Mikkel’s first IPA recipes), but Mikkeller continues to be one of the more interesting brewers out there (Gypsy or not). I’ve got another review of his stuff coming soon, and I’m sure I’ll continue to explore his ridiculously large selection of beers.