Alright, let me just check out Voodoo Brewing’s homepage first and… holy shit, what the hell? Did I accidentally time travel back to the early 1990s? Even by those standards, this isn’t a website that really gets the job done. But then, right there on the main page, it says “By the way I brew beer not websites, nor can I spell or type, so be critical of the beer not the website.” Well, at least they know what they’re doing. And they’re right, it’s the beer that counts, so let’s get us some oak aged imperial stout: 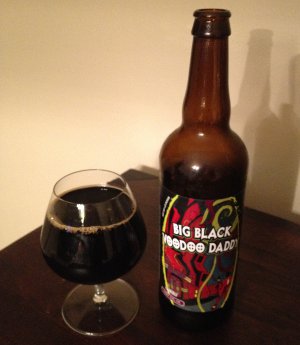 Voodoo Big Black Voodoo Daddy – Pours a thick, very dark brown color with almost no head (though what’s there is brownish). Smell is filled with rich aromas of caramel, vanilla, and oak with just a little in the way of roastiness. The taste is along similar lines, but with the roastiness taking on a much more prominent position. Chocolate makes an appearance too. Mouthfeel is thick and chewy with minimal carbonation, though it’s strangely not the heaviest thing I’ve drank lately. For a beer this big, the alcohol is hidden pretty darn well. Overall, it’s a very good stout. It’s not the best thing I’ve ever had or anything, but it’s my kinda stout. B+

Now apparently the Voodoo folks make a bourbon barrel aged stout that clocks in at 15% ABV and is only available in limited quantities (apparently there will be some small release party in Philly this summer, though details have not been announced). I’d love to try it though. This Voodoo Daddy beer took on some nice oak flavors without the bourbon character, but I’d like to try the bourbon barrel aged one too!