So I’ve been tagged in one of those godawful memes that are supposed to spread throughout the internet like wildfire, except that dorks like me… actually, I generally participate in memes. I like answering interesting questions, and beerbecue has some decent ones, so I figured I’d play along. At least until the time comes when I have to follow the rules. I don’t play by anyone’s rules. Especially not my own. That’s my rule.

Since I’m not following anyone’s rules but my own (which I don’t actually follow), I won’t post the original rules. Basically, beerbecue has listed out 7 questions, and I have to answer them. I think the original thing had something about creating new questions and tagging other folks to participate, but I’m not going to do those things because I’m uncreative, lazy, and don’t want to cause any ruckus in the beer blogging world. Enjoy:

Your first beer: That’s an excellent question. I have no idea. Well, I have ideas, but I’m not positive about anything. This is partly because my first was undoubtedly macro crap and thus not very memorable. I may have had a sip of MGD when I was a wee nerd, but when I think about it, I think it may have been a Busch beer. Certainly my first big drinking session was from a case of Busch pounders. Again, not very memorable.

Your first good beer: Also a tough one to pinpoint. I remember drinking Honey Brown, but that’s not exactly a “good” beer. Yuengling lager? Perhaps. But the standout craft beer revelation of my life was most definitely Ommegang Hennepin, stumbled on completely by accident (I wrote about the full story before).

Your favorite BBQ joint? How’s this for good memory: I don’t remember. But I do remember that I was in Texas, which does a slightly better job than PA when it comes to BBQ. And by slightly better, I mean ridiculous to even compare. On the other hand, I’m no expert, and I’m sure there’s something here, I just haven’t really sought it out. I hope beerbecue doesn’t lynch me.

Which childhood star most influenced you? Um… I don’t know. Ron Howard?

Would you rather listen to Exile on Main St. or Sgt. Pepper’s? Exile on Main St. I will say that I like both though, and quite frankly, I’ve never really gotten the whole Stones vs Beatles argument. Then again, I’ve always been more of a movies guy. I love music and all, but I just don’t understand it the way I do movies. Or beer for that matter:p

To the extent divulging it would not reveal top-secret, upcoming reviews…what beers are in your fridge right now? My upcoming reviews are probably no secret to anyone who follows me on Untappd, but I will share with you the results of my most recent beer run, because I’m super excited by all of these: 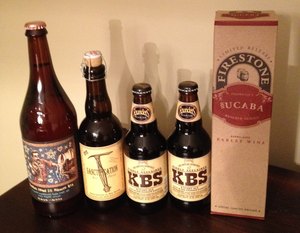 And there you have it. Of course, I probably won’t get to these anytime soon, but you’ll probably start seeing reviews in a few weeks. Though I may not be able to hold out on the KBS. Can’t believe I score two bottles of the stuff.

And that just about covers it. I’m supposed to tag 11 other bloggers, but I’ll just leave an invitation open to anyone reading. Heck, start your own blog and answer some questions. Otherwise, like beerbecue, I’ll just take the opportunity to pimp the bloggers on my blogroll over there on the right. They’re all awesome, and you should read them.

2 thoughts on “The Dammit Meme”