As it turns out, this is a 100% Cascade hopped beer. Victory sourced the hops for this beer from a family owned hop farm called the Segal Hop Ranch (i.e. Ranch S), apparently the first hop farmers to commercially grow cascade hops (starting back in the late 1960s), so these folks ain’t fooling around. In an interesting Victory blog post a while back, one of the Victory brewers recounted his visit to the farm, talking about the Cascade Hops (which are apparently also used in Hop Devil) as well as Citra and then there’s this intriguing tidbit: “During the visit, the Segals showed me an unnamed experimental hop they are growing that had a fruity aroma with notes of banana and vanilla.” Well that sounds interesting, but I’ll have to make due with this Cascade single hopped double IPA for now. I picked up a growler of the stuff a couple weeks ago and ended up drinking the whole damn thing that weekend. Incidentally, Victory’s growler filler machine thingy is absolutely badass. 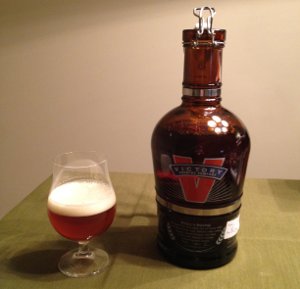 Victory Ranch S IPA – Pours a really striking clear golden orange color with a finger or two of fluffy white head. The smell is filled with earthy citrus hop aromas. As it warmed and/or as I drank more of it over the course of the weekend, I started to pick up more of a pine-like aroma. You know how all the descriptions of Simcoe hops say that they’re like Cascade on steroids? I never understood that until now. This Cascade beer really does have the smell (and taste) profile of a Simcoe beer. The taste is sweet with some of that earthy, piney citrus, but also a more floral or even herbal character leading into the dry, bitter finish and lingering aftertaste I expect from an IPA. Again, I feel like my palate adjusted to this the more I drank, with the pine taking a more pronounced position. Mouthfeel is smooth and just a bit sticky, with a light to medium body. Quite an easy drinking beer. I even got a bit of alcohol warming out of it, though I think that’s because I drank a lot of it quickly. It’s a lot like a souped-up Hop Devil (and it has less in common with Hop Wallop)… Hop Devil was the beer that sold me on IPAs, so this is very good thing, and a nice surprise from Victory. Again, as I drank more of it and that Simcoe-esque quality started to shine through, it perhaps came into its own. I really like this beer. A-

I have no idea if this beer will return (I went to the brewery again this past weekend and they were already out of this) or if Victory has bigger plans to bottle this or something, but I’m glad I got to try some, as I enjoyed it greatly.