Back in aught two, Stone started what they call a Vertical Epic. Each year, they put out a one-time brew that is meant to be aged until December 12, 2012. Assuming you’re patient enough, you can then enjoy a vertical tasting of all the brews (it’s not strictly a “vertical” tasting, as each year’s beer has a different recipe, but you get the idea.) Each beer is released on one of them funny numerological dates, like 2/2/02, and 3/3/03, and so on, with the culmination being on 12/12/12 later this year (after which, such numerical games are not possible). This year has the added benefit of being binary (for the last time this century!)

I’ve actually never had any of these beers until now, but they generally seem to be a Belgian Strong Ale with some sort of twist. This year’s installment was brewed with Anaheim chiles and cinnamon. Yeah, I think we’re all thinking the same thing here: 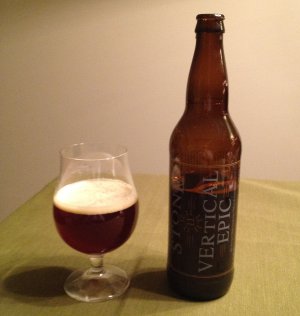 Stone 11.11.11 Vertical Epic Ale – Pours a dark amber color with a finger of light head and some lacing as I drink. Smell is filled with bready, musty Belgian yeast and some spiciness. The taste starts out surprisingly bland, with some sweet flavors emerging in the middle and a big bang of spice (chile and cinnamon are both there, though I’m not sure how well I’d be able to pick them out if I didn’t already know about it) hitting in the finish and plowing through the aftertaste. It’s most unusual. The chiles are definitely there and you even get a bit of heat from them (and it seems to build as you drink), but they’re nowhere near overwhelming (the way they’ve been in other chile beers I’ve had). Overall, this is an interesting beer with a unique character. It’s not a beer I’ll be pining after for years to come or anything, but I’m really glad I got to try some. B

An epic idea, for sure, but it seems I’ve come on board a little too late in the process! Still, I’ll check out that 12/12/12 beer for sure.