A “pannepot” was a fishing boat based in the small Belgian village of De Panne. As the story goes, the men would go out fishing and their wives would stay home and brew up a strong, dark beer. I don’t know how closely De Struise Brewery is following those historical recipes, but they call this beer their Fisherman’s Ale, an ale brewed with spices.

Struise is something of an anomaly in Belgium – they’re relatively young! In a country where some abbeys have a brewing tradition going back almost a thousand years, Struise began operations in 2003. They seem to be part of a crew of European brewers that are taking their cue from US craft beer, creating non-traditional Belgian beers. Apparently this wasn’t so successful at first, but as recounted in a recent article in The Atlantic (reproduced at theBeerAuthority):

Struise’s reputation is almost entirely a consequence of the Internet. “In the early days, it was impossible for us to sell beer in Belgium,” Grootaert said. But after a RateBeer.com user in Denmark contacted Grootaert and tried his beer, Pannepot began circulating within the Danish beer-geek community, and its Web-savvy fans broadcast their approval to the rest of the world.

Yet another thing to thank the Danish for, I guess. Cause this beer is pretty fantastic: 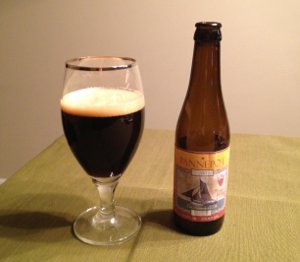 De Struise Pannepot – Pours a dark brown color with amber highlights and a finger of tan head. The smell is very strange. Spicy, but not the typical Belgian spice. Also very fruity sweet, maybe even some brown sugar. Taste starts off sweet with a spicy kick. Fruity sweetness emerges in the middle (again maybe some brown sugar) and lingers through the aftertaste, though it does finish pretty dry (with just a hint of bitterness). Complex flavors keep evolving as it warms up. Mouthfeel is great. Highly carbonated, but not overpowering. Nice full body. A really interesting beer, and something I’d love to try again. A-

Recommended if you’re looking for a good Quad/Belgian Strong Dark. Good stuff and I’m sure I’ll be crossing paths with De Struise again soon enough (heck, I didn’t even realize it, but this is my third post about De Struise without even really trying to focus on trying their beers…)