Over at Beervana, there’s a nice pedantic discussion over what constitutes an West Coast IPA (an offshoot of a debate with Stone’s Greg Koch). Truthfully, I’ve never quite understood the distinction myself, but I always assumed it had something to do with big, juicy American hops with all their fruit and pine characteristics. But reading those posts and the comments, it occurs to me that no one really knows and who really cares? Styles are like genres in that they’re fuzzy around the edges and often bleed into one another. Styles can give you a broad idea of what you’re in for, but maybe they don’t need to be quite so granular or locked-down.

Anyway, if you think west coast IPA’s are causing a taxonomy problem, check out this beer. Beer Advocate calls it an American IPA. Brasserie Dieu Du Ciel’s description adds some confusion to the mix:

Corne du diable (French for “Horn of the devil”) is a contemporary interpretation of the classic English India Pale Ale. This new style, born on the west coast of North America, is characterized by stronger and hoppier beers. The result is a red ale expressing caramel flavours coming from the malt, sharp bitterness and powerful hop aromas, thanks to dry hopping

Ok, everyone get that? It’s an English IPA born on the West Coast of North America, resulting in a red ale?

Yeah, so now you know why I only have one IPA category on my site (of course, that was born more out of laziness than anything else, but I digress). And the red ale intersection with IPA is also a bit of a pitfall, but maybe we should just drink the stuff instead of parsing its style: 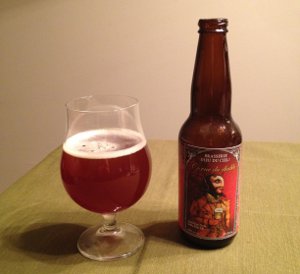 Brasserie Dieu Du Ciel Corne Du Diable – Pours a cloudy brownish amber color with a small amount of head. The smell is unusual. There’s definitely lots of hoppiness there – maybe a hint of citrus, but more herbal or floral aromas seem to be the most prominent. The taste has lots of caramel malt, very sweet, with that same hoppy citrus and herbal character, and a well matched bitterness in the finish. Maybe a little spice too, and I want to attribute that to the hops for some reason. In any case, big flavors for a 6.5% ABV IPA… Mouthfeel is fine, maybe just a tad light on the carbonation (but still fine for the style). Speaking of which, it’s called an American Style IPA, but it actually feels more English. Maybe even a hint of that butterscotch flavor that I always find in English pale ales and usually don’t like, but it really works here (perhaps because it’s not an overwhelming flavor). Overall, a very interesting beer. B+

Apparently the only Canadian beers I drink are French Canadian. Yeesh. It’s actually hard to believe this is my first Dieu Du Ciel beer though. I quite enjoyed it, so I’m looking forward to checking out more of their brews. They’re not quite as ubiquitous as Unibroue around here, but they seem to be pretty widely available. And I get the feeling they don’t really care about style either – most of their beers seem to be quite unusual (at least, from reading about them!)