Ron Regé Jr. is a cartoonist who has been putting out independent comics and zines since the 1990s. He somewhat recently began publishing a series of comics called “Yeast Hoist” which aren’t really about beer, though there’s some beer in the art and the phrase does seem to be slang for drinking a beer. But mostly it’s just art. A large portion of it is available on the internets, but he was apparently approached by Belgian Brouwerij Sterkens to do some exclusive art for their St. Sebastiaan Golden Ale, and it resulted in one of the most gorgeous bottles (actually a half-liter ceramic crock) I’ve ever seen: 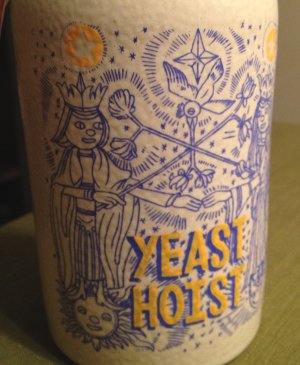 Apologies for the lackluster quality of the shot, but that is quite awesome, isn’t it? And while Regé’s art is often somewhat abstract, it really fits well with a Belgian abbey tripel style beer. Unfortunately, the contents of the bottle didn’t quite live up to the promise of the artwork… 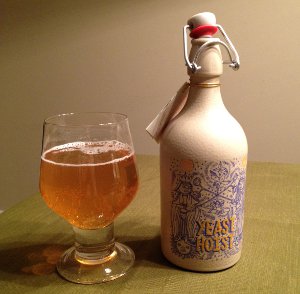 St. Sebastiaan Golden (Yeast Hoist) – Pours a surprisingly light golden color with an almost nonexistent head. Aroma is sweet, fruity, and spicy. Taste is very sweet, with a little fruit and spice. There’s a sorta bitterish aftertaste, but not quite enough to counter the sweetness. Mouthfeel is light, under-carbonated, and a little sticky. Overall, quite disappointing. A little more carbonation may have done wonders, but as it is, it’s underwhelming. C+

I’m pretty sure the Yeast Hoist bottles were a limited run, but the standard St. Sebastiaan Golden bottle is the same style ceramic crock thing, just with different artwork. It’s apparently somewhat popular, so perhaps I just got a bad, under-carbonated bottle or something.