It’s alive! As it turns out, this beer is basically a bottle conditioned version of Dogfish Head’s 90 Minute IPA. What does that mean? It’s pretty straightforward, but I’m going to make it complicated, because that’s what we do here at Kaedrin.

Let’s start with the magical wonder of yeast. The simple description of yeast’s role in brewing is that it eats sugar, processes it, then poops alcohol and farts carbon dioxide (this is known as “fermentation” in respectable circles that I do not belong to.) Since fermentation typically takes place in a closed vessel (to keep out nasty bacteria and other unsavory bugs), brewers need to release the gas building up inside, least we have exploding equipment due to the additional pressure. What this means is that at the end of the fermentation process, when you’re ready to bottle or keg your beer, you’ve essentially got a flat product. There are typically two approaches to carbonating the beer. The most typical approach is to filter all the yeast and proteins out of the beer, then force carbonate the beer (basically just injecting a bunch of carbon dioxide into the liquid, then bottling/kegging it right away). The other method is to “prime” the unfiltered beer with a small amount of additional sugars, then bottle it. The yeast remaining in the unfiltered beer (which is still alive) will eat up the new sugar and carbonate the beer, right in the bottle*.

There are pros and cons to each approach. Force carbonation allows for a quicker, more consistent product. On the other hand, it also means the beer won’t stay fresh as long. Bottle conditioning can and will change the character of the beer over time – as the yeast is still “alive”. Indeed, while most beer is meant to be drank fresh, bottle conditioned beers are often suitable for aging. The down side is that you end up with a layer of yeast on the bottom of your bottle, the end product can be less consistent (this can be a plus or minus when it comes to aging), and, of course, it takes a while to condition in the bottle. This is, of course, a drastic simplification of the subject, and there are many things I’m leaving out (i.e. kräusening, re-yeasting, bottle bombs, caged and corked beers, Belgian methods and so on…)

So Dogfish Head filters and force carbonates their 90 Minute IPA**, but their experiment with Squall was to see how bottle conditioning the same exact beer would change its character (there may or may not have been some extra dry hopping as well). They also barrel age their 90 Minute IPA (that version is called Burton Baton), and they blend the 90 and 60 minute IPAs to make the 75 Minute IPA. Alas, Squall seems to be going the way of the dodo. Given that hoppy beers tend to deteriorate with time anyway, this makes a certain sort of sense. I’m sure an aged version of Squall would be quite nice, but it would also be lacking a lot of the hop character you look for in an IPA (yeast will keep the beer viable with age, but it won’t do anything about various flavors and aromas derived from hops). It was still an interesting experiment that I’m glad I got to try, though: 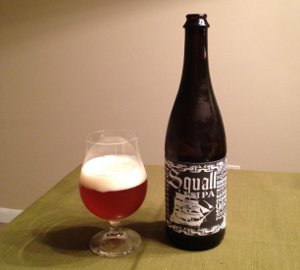 Dogfish Head Squall IPA – I think this might be my favorite Dogfish Head label ever. Anyway, it pours a cloudy, dark goldish orange color with a couple fingers of creamy head that leaves tons of lacing as I drink. Aroma is full of earthy hops and sugary citrus. Taste is very citrusy sweet with a light bitterness emerging in the finish. There actually is a musty yeast character here too. The mouthfeel is surprisingly full bodied, with lots of carbonation. Overall, a wonderful beer. I don’t know that it’s better than the 90 minute or Burton Baton, but I’m glad I got to try this variant. A-

I didn’t realize it, but this would have really made a good double feature with the standard 90 Minute IPA. I suspect there wouldn’t be a huge amount of difference, but I always find it illuminating to try such things together. Alas, with Squall going away, it seems that this is not destined to happen. Oh well, I guess you can’t win them all. Stay tuned for the start of this year’s holiday beer extravaganza.

* Bottle conditioning tends to be the favored method of the beginning homebrewer, as it doesn’t require any additional equipment. But you do have to wait. Most folks who invest in kegging systems also gain the ability to force carbonate the beer in the keg, which means you get to try the beer right after fermentation ends. Unlike me, who has to wait a couple weeks to try the beer. Not that I’m bitter.

** And it’s still an exceptional beer. Don’t take this post to mean that filtered beers are inherently bad, because there are lots of amazing beers in both camps.