So today saw the release of Victory’s Dark Intrigue, a bourbon barrel aged version of their Russian Imperial Stout, Storm King (in an event they called Dark Wednesday). I’ve never been to a big beer release, and this one was purported to be a big deal. Apparently all of last year’s batch sold out in 45 minutes or so, and Victory announced that this would be the last year they’d be making this particular beer. They apparently made more of it this year, but given the extremely rare nature of the beer, I decided that I must go to the brewery early and get me some bourbon barrel goodness.

Because I’m a nerd, that’s why. 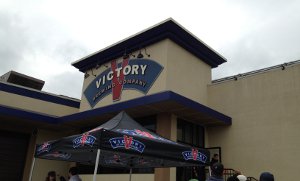 Victory’s brewery is in a weird location. It’s like you’re driving around in a neighborhood, lots of houses, when suddenly you make a right turn and bam! Brewery. I actually know several people who live in homes within walking distance of the brewery. This, of course, makes me want to sell my home and look for such houses, but I digress. Not really knowing what to expect, I left my house rather early this morning, arriving at around 8:45 am. I ended up being #44 in line. They have a nice, stress-free system here, rather than the clusterfuck I was expecting. You arrive, they give you a numbered wrist band, and you’re thus free to do whatever you want until around 11 am, at which point they request you get in line, in order. Nevertheless, most of us just stood around in a rough approximation of order. It actually rained this morning, which I think decreased the turnout a bit (300 cases were apparently available, and well more than that showed up, but still), but it was all good. Most folks were well prepared, and those that weren’t were able to head to their cars without losing their spot in line.

The few hours passed by quickly. The rain died down, the sun came out, and thus we assumed God was blessing the occasion. Beer nerds are apparently quite friendly folk, and I spent most of the time talking with my neighbors in line. Oddly, we did not introduce ourselves. I have no idea what their names are and I didn’t give mine. Strange. But we talked beer and shared stories and had a generally good time. The time came, and we got our beer. It was all quite exciting, in a nerdy way. Upon returning home, I immediately cracked the case and put one in the fridge for later. I was assuming that the beer would still be young and brash, not very well balanced, and that it would take a while for it to mellow out, but I got a case of the stuff, so I might as well try one as soon as possible: 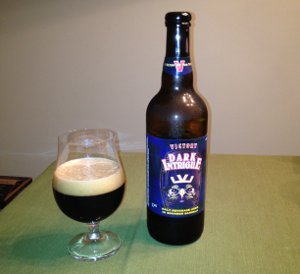 Victory Dark Intrigue – Pours a pitch black color with a finger or two of light brown head that slowly disappears, leaving some nice lacing patterns. The nose is very complex and surprisingly balanced for such a young beer. I’m getting some roastiness, some hops, and a nicely matched amount of oak and vanilla, with just a bit of bourbon and booze. The taste starts off with some sweet and maybe even chocolately notes, with some bitterness settling in the finish and aftertaste. Booze cuts in on the bitterness though, making it all seem balanced. In addition, the oak, vanilla and bourbon come out in the middle and last through the finish, but it’s not nearly as overpowering as I was expecting. The mouthfeel is very strong and full bodied. It’s thick and coats the mouth, what the beer nerds would call chewy. There’s a bit of a bite to this too, though things seem to smooth out a bit as it warms up. The booze and bourbon give the beer a sorta hot character, which lends itself to the typical warming alcohol feeling as I drink. Overall, I was not expecting this to be as good as it was. I was thinking that it would need to age a bit before all the various flavors would come together, but damn, this is working right now, on day one. I’m sure it will mellow out some, perhaps that hot bite will smooth out with time. Great stuff from Victory. I’ll give it an A, though I’m sure that’s partly the novelty speaking here. So sue me.

I actually had a regular old Storm King last night, in preparation for this bourbon barrel version. I actually reviewed this beer a while back, but the one I had last night was much better than I remember (at least a B+ if not an A-), but perhaps having it on tap makes a difference (I’m also told that having it on cask is amazing, but I’m dumb and haven’t tried that yet, despite it being available regularly). That being said, the bourbon barrel version is definitely a step up, which basically means that this was all a fantastic idea.

Victory is saying that this was an experiment with barrel aging. The general idea was to take one of their existing beers and put it in bourbon barrels to see what happens, then take their learnings and apply it to making new and unique barrel-aged wonders. Given how this turned out, I can’t wait to see what they do with barrels next.