Continuing the Oak Aged posting this week, here I’ve got two big Oak Aged beers, matched with gorgeous but flawed films. First up, Tarsem Singh’s Immortals, a horribly scripted Greek mythology story that is nonetheless worth watching for some wonderful, stylized action sequences and Tarsem’s trademark visual style (a feast for the eyes!) Next, I watched Terrence Malick meditative The Tree of Life, a non-narrative fever dream, again gorgeously photographed and mesmerizing, but going on for way too long and, odd as it may be to say this, too much dialogue (and there’s not really much dialogue in the movie, but what’s there is kinda insipid). Very pretty movies, both, but also flawed. The beers I drank to match were big and flavorful. 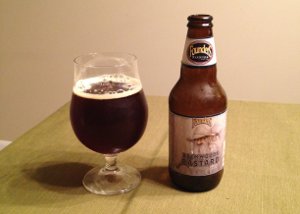 Founders Backwoods Bastard – Does the backwoods bastard pictured on the label look like Gandalf the Grey to anyone else? No? I’m the only nerd here? Great. Anyway, you don’t see this style of beer, a Scotch Ale/Wee Heavy, aged in barrels very often (or, uh, ever – this is the only one I’m aware of*). This beer actually starts out as Founders’ year-round brew, Dirty Bastard, which is then aged in old bourbon barrels, bringing up the ABV and imparting the usual complexity of bourbon barrel notes. Pours a dark, deep brown color with very little head. Aroma is full of bourbon and oak, with some of that underlying scotch ale character coming out. Taste starts with sweet malts, followed by a big wallop of boozy bourbon and oak. Ends with a surprisingly dry finish (well, not super dry, but more dry than I would have expected). The mouthfeel is medium to full bodied – not as heavy as I was expecting, which makes this very easy to drink. I wouldn’t say the booze is hidden, but it’s not as powerful as the ABV would suggest, which is interesting. Overall, a really good beer, something I’d like to try again, but also something that could probably use some additional aging to marry the flavors together a little more. B+ 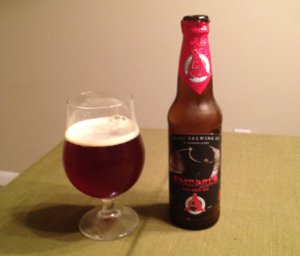 Avery Samael’s Oak Aged Ale – Back in the day, when I first started posting things on the internet, message boards were all the rage. Along with that came the use of handles, basically online nicknames people took for themselves. I’ve since grown out of that fad**, but there are still some folks I met back in the 1990s message boards that I think of by their handles, rather than their real names. One such person is my friend Roy, who I always knew as Samael (which is also apparently the name of the prince of demons, but whatever). As such, during my recent Texas excursion, I saw this beer and had to have it, despite not being a native Texas beer (it’s not something I’ve seen around these parts though, so it’s still something mildly ungettable for me). So I got one and greedily smuggled it back to PA***.

It pours a deep brown color with minimal head. Smell is full of dark fruitiness and caramel, with just a little of the vanilla oak flavor. Caramel flavors dominate the taste, along with a heaping helping of booze. The oak and vanilla is there too. As it warms, dark fruity notes emerge. Really complex stuff here, though not particularly well balanced. Mouthfeel is full bodied and rich, with a sticky finish. A really big alcohol presence here, a little on the harsh side. Overall, it’s a very good beer, but like the Backwoods Bastard, I’m thinking this one would benefit from some aging in order to let all the intricate flavors to balance each other out. When it’s this young, it’s a little too hot to handle, maybe even a bit cloying towards the end, though still enjoyable. B

A theme seems to be emerging from a lot of barrel aged beers I’ve had lately, which is that they could probably use some more time to mature. The complex marriage of flavors that makes a barrel aged beer great seem to be difficult to balance, though when it’s done right, it’s a big revelation. That being said, I generally enjoy even these young versions, so it’s not like you won’t be seeing any more barrel aged beer reviews (indeed, one more already in the pipeline, and several more in my basement that I might just let sit for a while). I’m also really interested to see how Dark Intrigue matures, given that it seemed pretty well balanced to me on its first day of release…

* Not that I’m an expert on the style, but still.

** My handle was tallman, a reference to a cheesy but cherished 70s horror film that I was in love with at the time (and still am, to a degree). And no, I’m not very tall.

*** Using the same giddy packing techniques I did for that Wytchmaker beer. I’m still amused at the prospect of becoming a bootlegger.