Earlier this year, I had a bottle of Uinta’s Cockeyed Cooper, a bourbon barrel aged barleywine that was fantastic. It’s part of Uinta’s Crooked Line, a series of heavy-duty beers that isn’t even legal to sell in a lot of the most common beer sellers in the brewery’s home state of Utah (i.e. this beer can’t be sold in grocery stores or establishments with a “beer only” license – those places are limited to beers less than 4% ABV (so… basically English milds and light beer?)) Stronger beers in Utah have to be sold at state controlled liquor stores or places with a “Full” liquor license. Or out of state, which I suspect is where most of these beers are sold. As someone who also suffers under some weird liquor laws, this sort of thing has always inspired solidarity in me, and so I’ll gladly plunk down some cash for these beers.

It helps that they’re really well crafted and have wonderful artwork (apparently from local Utah artists) on their labels as well. Labyrinth’s label is certainly eye-catching – it pops right off crowded shelves, even when it’s not front-and-center. And it’s mesmerizing to look at (though not quite one of those weird optical illusions, I was still half expecting to see a secret hidden message on the bottle if I got drunk enough* or stared at it the right way). It’s described as a Black Ale brewed with licorice sticks and aged in oak barrels. I assumed this meant an American Black Ale (or Black IPA or Cascadian Dark Ale or whatever you want to call the style), but it turns out that this is actually an imperial stout. The labeling for this beer seems to have a lot of suggestive power (more on this below the review)… 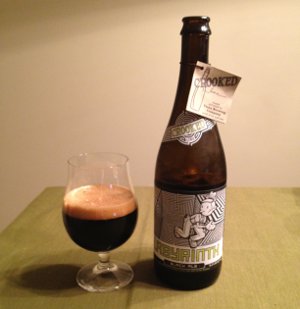 Uinta Labyrinth Black Ale – Pours a very thick, black color with a dark brown finger of head. Complex aromas of roasted and caramel malts, along with a heaping helping of bourbon, oak and vanilla and, of course, booze. Tastes starts out very sweet, maybe even some dark fruitiness peeking out, but the alcohol and roasiness come out with full force in the finish. The bourbon/oak/vanilla flavors are also there, adding a sense of richness and complexity to an already flavorful beer. Mouthfeel is surprisingly smooth, with just a little boozy sweet stickiness. It’s clear this is strong, but it’s also very easy to drink and it hides the extremes of alcohol very well. Exactly what I’d want out of a barrel aged imperial stout. A-

I find it interesting that most of the descriptions of this beer do not mention the bourbon. The bottle itself just says “aged in oak barrels” and in the description, it says “toasted oak”, with no mention of bourbon. Apparently the barrels were previously used for bourbon and rye whiskey, but it doesn’t really say that anywhere. Including, I might add, most reviews on Beer Advocate and RateBeer. Of the first 70 reviews listed on BA, only 6 mention bourbon flavors, though to my palate it was clear as day (“rye” shows up only once)**. Licorice, which I couldn’t really pick out*** (though perhaps it added to the complexity), is mentioned in 6 of the first 10 reviews. What does this all mean? Could it be that all these reviewers are full of shit? Seriously, here’s one of the reviews:

…suggestive of brown sugar (which has an increasingly burnt quality as the flavors evolve), candied fennel seeds, and licorice root. Low bitterness, though the deep roast notes lend a somewhat acrid quality. Toasted dark rye, black pepper, with a touch of cinnamon/clove as well in the finish. The oak contributes an additional sensation of char which further balances the initial sweetness.

Um, yeah, sure. Candied fennel seeds? Yeah, my palate is that attuned too. In all seriousness, I shouldn’t talk – my palate isn’t the most refined in the world and I often drink in less than ideal conditions. But I do find it interesting how suggestive the labeling and marketing has been with this beer. I suspect that if it said it was aged in rye whiskey barrels on the bottle, half the reviews would call out rye as a distinct flavor element (perhaps even delving even deeper, describing “toasted Jewish marble rye” flavors or something else that is absurdly specific). Or maybe I’m just full of shit myself.

** I wasn’t as thorough with RateBeer, but spot-checked results seemed comparable. For that matter, I didn’t look at all the reviews on BA either. Sue me.

*** I’m certainly no expert on licorice though, so maybe it is obvious and I just wasn’t perceiving it.